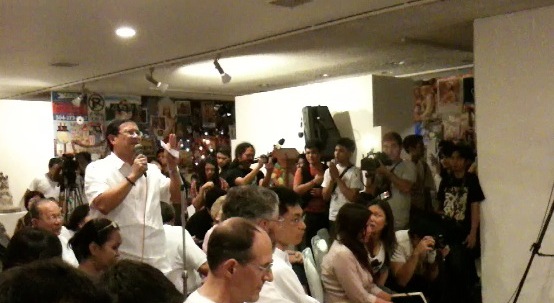 What the conservative Catholics kept braying about during the forum was that Cruz’s piece offended the majority of Filipinos, which is still dominated by the Catholic Church, just going by the numbers. They still seem unable, however, to fathom the possibility of dissent among their ranks by naively assuming that every person baptized in the Catholic Church as a baby agrees with their single-minded cause of suppressing individual freedoms.

Yolly Gamutan, National Secretary of the Catholic Youth League of the Philippines, should be commended for saying something in the forum that every other conservative has been thinking these past months but was never brave enough to voice out. She said that “…to be Catholic, we cannot be independent in our thinking….” This brief moment of sincerity perfectly frames all the culture war issues in the Philippines right now—from divorce to the ever-contentious RH bill.

The underlying idea being fought over via church bulletin boards, bumper stickers, and Facebook walls is the seemingly novel concept of freedom. In this issue, the CBCP and its cohorts seem unaware that the concept of free expression is meaningless if it were meant only to protect the agreeable but not the offensive. And it appears that the word “freedom” means entirely different things depending on whether a conservative Catholic says it or whether a proponent of free speech says it.

To the conservatives, freedom is simply the “freedom” to act according to God’s will. This Bo Sanchez-esque cliché pervades each and every action the CBCP and its front organizations present to the public. The whole notion of self-determination and the freedom to act according to one’s own independent thoughts and beliefs is alien to them. The clerico-fascism that is the spirit of our times is crusaded for by the Church under the guise of well-meaning and an honest belief that they know better than everyone else. They’re only suppressing liberties because they know for a fact that people couldn’t possibly willfully disobey God or freely choose to go to hell.

Another absurdity proudly flaunted by the conservatives during the open forum was their call for relying on a so-called “absolute universal standard for art”. Instead of progress and a sign of maturity, they see the acceptance of new things as a sign of relativism, which is a mortal sin. The call for universal standards for art itself betrays a sense of crippling self-doubt on the part of the conservatives that the brain their Creator made for them is incapable of reaching its own conclusions. This Creator who is apparently so thin-skinned that even though he is able to create supernovas and black holes, he is still insecure enough to be insulted by what some insignificant creature built in some tiny planet. I am amazed at the gall and bravado of these mere humans who claim to speak for the feelings of an omnipotent deity, saying that God is offended by some art installation no one else would have seen had they not raised a stink about it. And they say it is the atheist who is arrogant and self-possessed.

Children, as expected, were used as arguments against Cruz’s work. Think of the children who would see such obscenities and sex-related imagery! But, I think I understand now who the children they keep referring to are. It is the conservative Catholics themselves who are the children—incapable of deciding for themselves what is right, impotent in the face of nuance, and unable to comprehend that other people exist and that they have their own wills and minds.

They called Cruz’s piece “trash” and “pornography” while unwittingly involving themselves in what is itself art—the unending discourse of what art is. And I should love to see a reenactment of the farce that occurred that Friday at the CCP. No avant-garde movement could ever challenge the sheer bombast and ludicrousness of the Catholic Church and the people who speak for it.