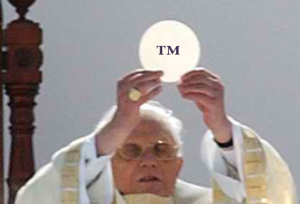 Manila, Philippines — In response to the existence of Catholics™ for RH (C4RH), the Catholic™ Bishops Conference of the Philippines have trademarked the term, “Catholic™.”

An official of the CBCP said Monday that the term “Catholic™” is reserved for those who obey the Pope’s teachings and are granted an official license by the Vatican through its newly formed franchising agent in the Philippines, the CBCP Commission on Franchising and Life (COFAL). COFAL recently filed a complaint with the Intellectual Property Office of the Philippines against C4RH.

“Catholics™ for RH are not authentic,” added Cebu Archbishop Jose Palma, COFAL president. “They are not recognized as Catholics™.” Last week, Archbishop Palma refused to meet members of the group unless it changed its name. “Either they change the ‘Catholic™’ part or they change the ‘for RH’ part. As it stands their name is an oxymoron, let alone illegal.”

In accordance with the guidelines of COFAL, Laguna Bishop Leo Drona, COFAL vice-president, issued a “clarificatory note for the guidance of all Catholics™ so that they may not be deceived or misled by C4RH.”

Bishop Drona added that COFAL “does not consider nor recognize this group to be an authentically Catholic™ association or group since it espouses and supports a stand contrary and in direct opposition to the magisterial teachings of the Church. Their group violates not only Canon laws but intellectual property laws as well.”

Because of the CBCP’s recent actions, some Catholics™ said that they’d leave the Catholic™ Church and form their own.

COFAL President Palma casually dismissed these threats. “They can do whatever they want in their own church but it is useless,” said Arhbishop Palma. “The sacraments, the prayers, even the bread and wine have no holiness or power unless properly franchised by the Catholic™ Church.”

COFAL have recently filed applications to trademark the terms “moral,” “family,” and “life.”