From Pro-Lies to Puro Lies: Why Ang Prolife Lied to COMELEC 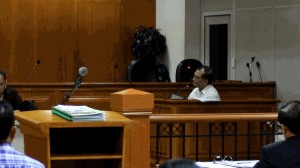 Eric Manalang swore under oath: to tell the truth, the whole truth, and nothing but the truth, so help him God. But it appears that God didn’t help because as we told you yesterday, he lied. Now I’m going to tell you exactly why he lied — because if he had told COMELEC the truth about Ang Prolife, their petition, then and there, would have been rejected.

Because Ang Prolife goes against the core principles of the Party-list system:

It is a mechanism of proportional representation in the election of representatives to the House of Representatives from marginalized or underrepresented national, regional and sectoral parties, or organizations or coalitions thereof registered with the Commission on Elections (Comelec).

It is part of the electoral process that enables small political parties and marginalized and underrepresented sectors to obtain possible representation in the House of Representatives, which traditionally is dominated by parties with big political machinery.

From this, we can see that to check whether a group deserves Party-list accreditation, we must ask three questions:

The answer to all three is “no,” and I’ll show you why.

For starters, read Ang Prolife’s official Party-list declaration. In ten pages, they make it absolutely clear that their primary purpose is to oppose the RH bill — and other such “DEATH” bills — and to ensure that such laws will never be legislated.

Their introductory principles are peppered with vague and religious statements, but eventually they talk about what they’ll do in concrete terms:

Ang Prolife… against all legislation and policies that seek to legalize or institutionalize, among others:

We can see that two of these — un-reproductive health rights [sic] and public child sex education — are provisions of the RH bill, while two others — abortion and radical feminism — are what anti-RH groups perceive to be the RH Bill’s direct implications. Almost half the list then is RH-related, and if we consider their slippery slope thinking — RH will inevitably lead to others “DEATH” bills — then the entire list is an anti-RH advocate’s nightmare.

Which is exactly the group Ang Prolife actually aims to represent: anti-RH advocates.

But ask them what they think will happen if the RH Bill is finally put to a vote and you’ll invariably get the same answer: “The RH Bill will not pass because we have the numbers.” That is, they claim they have more representatives in both houses of Congress, at least more than the pro-RH side.

And it’s easy to see just how committed anti-RH legislators are — from merely delaying the debates the way Team Delay has to saying that they’re staking their careers to stop the bill’s passage as Senator Sotto has. Can anyone honestly say the anti-RH is politically underrepresented?

They may argue that these anti-RH legislators are not directly affiliated with Ang Prolife. But that would once again be a lie. Two congressmen — William Irwin C. Tieng and Mariano Michael M. Velarde of Buhay party-list [Life (!) party-list] — are active members of Pro Life Philippines’ board of trustees. So is Buhay party-list’s secretary-general, Wilfrido Villarama.

Sure, Prolife Philippines is not the same entity as Ang Prolife, but with the same people and principles guiding both groups, this might as well be a distinction without a difference. Compare the Ang Prolife partylist declaration with the issues and principles in Prolife Philippines’ website. (You’ll probably find plagiarism, but then again, you can’t plagiarize yourself.)

We can even go further than saying Prolife Philippines and Ang Prolife is one and the same. They may do their best to deny it — in fact this is one of the first things they had to do — but Ang Prolife, if accredited, will be the CBCP party-list.

This is what logically follows from the kind of religious obedience Ang Prolife’s members give to their bishops in the CBCP. The similarities in their principles are not merely a correlation or coincidence. The relationship is causal. Whatever the CBCP teaches (or commands) Ang Prolife will follow. This is of course unstated in their declaration, but ask anyone in Ang Prolife if they have the ability to dissent with anything the CBCP says and you’ll get the same answer.

And even if the CBCP is not exactly the same as Ang Prolife (at least not on paper) the Catholic bishops are among the anti-RH citizens Ang Prolife aims to represent. And ideologically, the CBCP is the main source and promoter of every principle Ang Prolife wants to promulgate. It would be fair then to ask the same questions of the CBCP and the position they represent: are they marginalized, underrepresented, or lacking in political machinery? I won’t even justify the question with an answer.

It becomes clear then why Eric Manalang had to lie under oath and say (initially) that they had no plans about the RH Bill and that they would primarily represent the 10 million families with members who are OFWs. Telling the truth — that Ang Prolife is the political arm of Prolife Philippines — would get them an outright rejection.

One thing that baffles me though is the forethought (or lack thereof) they put into their lying. With all the effort they put into trying to convince COMELEC that they represent OFW families, they should have dedicated more space to OFW issues in their 9-page document. As it stands, they only put a single sentence:

I think we’ll have to change our term of endearment from “Pro-Lies” to “Puro Lies.”