Penn Jillette, one half of the magic act and general ruckus raisers, Penn & Teller, has come up with a set of 10 commandments for atheists. 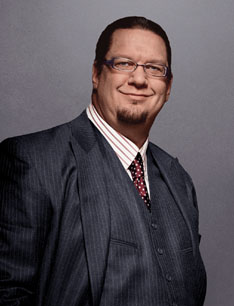 As expected from someone as entertaining as Penn Jillette, these commandments are way more fun and rational than the 10 commandments of ye olde testament. Here are his commandments:

1. The highest ideals are human intelligence, creativity, and love. Respect these above all.

2. Do not put things or even ideas above other human beings. (Let’s scream at each other about Kindle versus iPad, solar versus nuclear, Republican versus Libertarian, Garth Brooks versus Sun Ra— but when your house is on fire, I’ll be there to help.)

3. Say what you mean, even when talking to yourself. (What used to be an oath to (G)od is now quite simply respecting yourself.)

4. Put aside some time to rest and think. (If you’re religious, that might be the Sabbath; if you’re a Vegas magician, that’ll be the day with the lowest grosses.)

5. Be there for your family. Love your parents, your partner, and your children. (Love is deeper than honor, and parents matter, but so do spouse and children.)

7. Keep your promises. (If you can’t be sexually exclusive to your spouse, don’t make that deal.)

8. Don’t steal. (This includes magic tricks and jokes — you know who you are!)

9. Don’t lie. (You know, unless you’re doing magic tricks and it’s part of your job. Does that make it OK for politicians, too?)

10. Don’t waste too much time wishing, hoping, and being envious; it’ll make you bugnutty.

Western atheists seem to be co-opting cultural artifacts from Christian traditions for their own heathen ends recently, with AC Grayling recently coming out with his own atheist bible. What would your own 10 commandments for atheists be and are there local artifacts that atheists in the Philippines can co-opt? Discuss in the comments!