What actually happened at Manila Cathedral: Revealing the lies and bigotry of Eric Manalang and Pro-Life Philippines

In TV interviews and several published articles, Pro Life Philippines President Eric Manalang lied about the events at Manila Cathedral, when members of Pro-Life Philippines harassed RH Supporters. Hopefully, this post (and the attached video) adds some clarity and reveals the lies Anti RH groups (including the CBCP) have been publishing — despite photos and videos that clearly shows what actually happened. 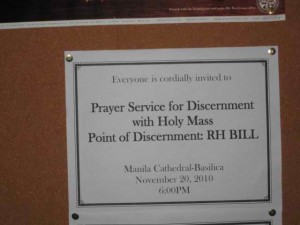 1. We were invited to this event.

Or at least we weren’t told that we couldn’t attend. There were invites posted on bulletin boards with the words, “Everyone is cordially invited.” The organizers did not say that the event was exclusively for anti-RH bill Catholics only. We were even given invitation flyers outside Manila Cathedral, despite the fact that we were visibly wearing Damaso shirts.

2. We were told to stay — at least initially. We weren’t asked to leave at once.

3. Members of Pro-Life Philippines attacked us. We didn’t fight back in any way.

We were respectful — we kept calm, even as they repeatedly insulted us and eventually resorted to violence. They called us Satan. They asked us to tell our mothers that they should have aborted us. They pushed us and tried to grab our cameras. The media has made it seem that there was an exchange of harsh words. There was no exchange. We have videos proving that all the violence came from the Pro-Life side.

4. Eric Manalang is bigoted — even toward fellow Catholics.

When a Catholic mother said that she was still a Catholic despite her support for the RH Bill, Manalang said, “That’s an oxymoron.” Manalang was saying that you cannot both be a Catholic and a supporter of the RH Bill. If that is the case, then the Church should stop claiming that 85% of all Filipinos are Catholics, because recent surveys show that most Filipinos support the RH Bill.

But aside from claiming to know what it means to be a True Catholic, Manalang insults supporters of the RH Bill by calling them Satan. What’s worse, he — and other Pro-Life members — asked them to tell their mothers that they should have been aborted. Is he saying that he prefers RH Bill supporters were never born? Or worse — if abortion is killing — that they were murdered?

5. The Catholic Church Hierarchy and Pro-Life Philippines are liars.

In addition to expressing our support for the RH Bill, we attended the event to learn why the Anti-RH groups opposed the RH Bill. We found out that their opposition was based on nothing but lies.

They distributed pamphlets claiming, among other things, that even mere condoms — which they wrongly consider abortifacients — could give cancer, heart attacks, stroke, and disabilities to the user and their offspring. They claimed that there was universal evidence that condom use increased the spread of AIDS. There is absolutely no evidence that supports any of these claims — and plenty of evidence that contradicts them.

6. The writers of CBCP Online are liars:

In their retelling of the incident, they said that we “forced” to get inside the Church. We have video of the conversaton with Marita Wasan showing that there was no force — we simply asked if we could go in. When she said we should wait, we simply waited.

They said that the pro-RH group were mostly teenagers from the Filipino Freethinkers. Of the more than twenty people there, only two were teenagers. And more than half were members of the Democratic Socialist Women of the Philippines.

They lied about what Manalang said. They quoted him saying the following:

Manalang never said any of this — neither did any of the other members of Pro-Life — while we were leaving the cathedral. What they actually said was harsh beyond imagination — “Satan!” “Your mother should have aborted you!.” Fortunately, we have the video to prove it.

The Church has repeatedly said that it is open to have a dialogue on the RH Bill.

But it’s now clear that not only are they unwilling to have a conversation, they are going to use lies, harsh words, and even violence to ensure that only their monologue is heard.

Catholics believe that Satan is the prince of lies. When Manalang shouted for Satan to stay out of the Church, it may have been too late. He was already inside.