[UPDATE] For more comprehensive video coverage of the event, as well as clarifications on some damage control by the Pro-Life side, read this. 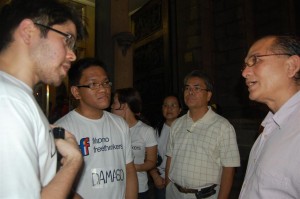 The Filipino Freethinkers and the Democratic Socialist Women of the Philippines went to the Manila Cathedral where an anti-RH bill discernment mass was supposed to be held. Representatives from these two organizations wanted to hear the reasons that would be given in the lecture as to why the CBCP was against the RH bill.

Unfortunately, they were denied entry from the chapel for wearing Damaso-printed shirts, which these organizations have worn to express their disagreement with the CBCP’s position. However, they were told that the organizers would consider letting them inside after the ongoing mass ends.

Afterbeing denied entry to the Manila Cathedral, the RH Bill supporters decided to wait outside the church for the mass to end. Several pro-life supporters handed FF and DSWP members Anti-RH Bill leaflets which had misleading information, including the claim that condoms caused cancer.

After a few minutes , a group of anti-RH Bill Catholics, led by Pro-Life Philippines president Eric B. Manalang confronted the RH Bill supporters and told them that their presence was not welcome. Several members of both the Filipino Frethinkers and the DSWP attempted to reason with these people, explaining how some of them were also Catholic and simply wanted to hear why the RH Bill was considered “evil.”

Lorna Ferrer, a member of the DSWP, told Mr. Manalang that she was Catholic. Mr. Manalang responded with, “You are not a real Catholic! You are an oxymoron!” — implying that Catholics who use or support any form of artificial contraception could not possibly be “real” Catholics.

Other members from both organizations attempted to calm down Mr. Manalang and company, but these pleas fell on deaf ears as the harassment escalated and the RH supporters were attacked with harsh words and mild violence.

Here are just some of the statements hurled at members of the Filipino Freethinkers and the DSWP by Manalang and company:

“This is our territory. Get out of here!”
“Damaso is a fake. You’re a fake! You are the Damaso!”
“Get out of here, Satan!”
“You should tell your mother that she should have aborted you!”

There is video footage of Mr. Manalang and company pushing several supporters and trying to take away cameras from two members of the group. Police officers intervened and escorted the FF and the DSWP away from the premises of the cathedral for the safety of these RH supporters.

As the organizations walked away, Pro-Life advocates continued the barragewith “Get out of here, Satan!” “Away, Satan, away!”

Meanwhile, the anti-RH reflection service was going on inside. One of the speakers, Dra. Angie Aguirre, asked the churchgoers inside: How many have read the actual text of the RH Bill? Less than ten percent raised their hands.

Update: In place of what’s actually in the RH Bill, these are the lies the Church teaches its flock about the RH Bill. 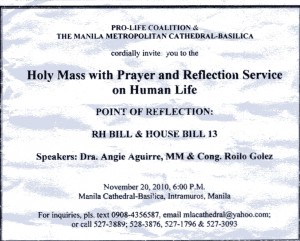 Update: Anti-RH supporters handed out invitations to the anti-RH service outside the Manila Cathedral, even to people visibly wearing DAMASO shirts. Click to view the invitation.