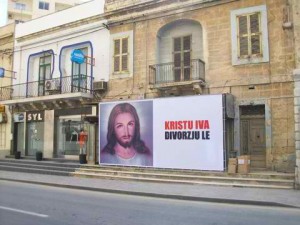 Yesterday, the pro-divorce movement won the referendum on divorce with a majority of 54%, ending a battle that has delayed the much-needed measure for decades. The victory came despite the constant political meddling and religious blackmail of the Catholic Church.

Sound familiar? Aside from the happy ending, which left the Philippines the only country without divorce1, the story of Malta’s divorce referendum shares similarities with our own reproductive health (RH) debates:

And in both cases, the conservative bishops use fear mongering to keep their flock in line. In Malta, the religious blackmail came to a climax during a homily by
Bishop Mario Grech.

In the sermon, he warned of “brigands” who want to “lead the flock astray” and “are going after marriage.” He said that members of the pro-divorce movement were lying about being Catholic:

The message is consistent with a nation-wide campaign the Church had launched, in which billboards featuring Jesus’ image said “Christ Yes, Divorce No.” Anti-divorce advocates also brought Mary into the picture:

Opponents of reform have invoked the Blessed Virgin and raised the spectre of Maltese society falling apart. Tonio Fenech, the finance minister and a Nationalist Party MP, wrote on a local news website recently: “I am sure Our Lady is very sorrowful that Malta is considering divorce.”

The anti-divorce campaign was denounced by Jeffrey Pullicino Orlando, an MP with the ruling Nationalist Party:

“The ‘no’ campaign has been disgusting,” said Mr Orlando, who set the referendum ball rolling. “Old ladies who said they would vote for divorce have been barred from taking Communion. An old electoral roll has been used, which means that 2,800 youngsters who are entitled to vote will not be able to. Lay Catholic organisations and 5,000 priests and nuns have also gone door-to-door campaigning. Limitless funds have been offered to the ‘no’ side.” Voting “yes” has been declared a mortal sin from the pulpit.”

To their credit, the bishops did say they were sorry if anyone was hurt by their anti-divorce campaign. Pro-divorce advocates, however, found this hard to believe:

In a reply, pro-divorce group StandUp Malta said the bishops’ statement was an apology which they found difficult to accept.

It was very hard to believe that the apology was genuine, especially since the Church’s campaign continued blatantly even on reflection day yesterday and voting day today.

The apology, they said, should have been made during the campaign when a lot of people were hurt by extreme declarations such as when those who were voting yes were called wolves in sheeps’ clothing.

The fact that the bishops wanted their apology broadcast once voting closed was Machiavellian and dirty.

Regardless of the bishops’ sincerity, I understand why they’re on the defensive. Winning the divorce debate is already Malta’s second secular victory in only six months. Last November, after a decade of opposition from the Catholic Church, they finally launched a long-awaited national sexual health policy — the counterpart of our RH Bill.

That’s two out of five D-E-A-T-H bills in half a year!3 How can a country that’s even more Catholic than the Philippines say “yes” to divorce and RH?

I believe the answer is secularism. While bishops fight to impose their convictions, progressive Catholics in Malta defend separation of church and state and respect the religious freedom of others — even those who have convictions different from theirs:

The Catholic pro-divorce group reiterated yesterday that although they held Christ’s teachings on marriage in high esteem they could not impose their beliefs on the rest of the people.

“Irrespective of how strongly we believe that divorce is bad for the country, we can never sideline the principle taught by Christ and expect others who do not share our faith to submit to our beliefs,” a group spokesman said.

The group said it was every Catholic’s duty to vote yes in the referendum because the issue at stake was whether what Catholics believed was right and wrong should be imposed by the state on everybody else. “We believe there should never be imposition…”

No imposition. Now — other than the bishops — who won’t say “yes” to that?

[1] No, I don’t consider the Vatican a country.

[2] Actually, you can be pro-divorce and still remain Catholic. But you could be excluded from Holy Communion for doing so. I wrote about these sanctions here.

[3] Divorce and Total Reproductive Health are down; Euthanasia, Abortion, and Homosexual Marriage remain.