Last Sunday, Feb. 27, 2011, the Filipino Freethinkers and fellow pro-Reproductive Health (RH) groups under the Reproductive Health Advocacy Network (RHAN) held the Memorial March for Mothers from Padre Burgos St. to the Catholic Bishops Conference of the Philippines (CBCP) headquarters in Intramuros, Manila. The march and its succeeding mass action at the CBCP gates aimed to call the Catholic Church’s attention to the 11 Filipino women who die each day due to maternal complications. These complications could have been avoided with proper sex education and reproductive health services, but these rights continue to be suppressed thanks to the CBCP’s condemnation of the RH Bill and its efforts to delay the Bill’s passage.

With over 1,000 supporters in attendance, last Sunday was purported to be the largest protest in Philippine history against the CBCP. 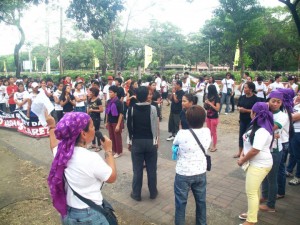 The supporters first assembled at the Cory and Ninoy monument across from the Manila Hotel. White shirts and purple scarves served as the day’s official garb. Stickers bearing the slogan “11 Women Die Everyday. Do Bishops Care?” were also passed around. 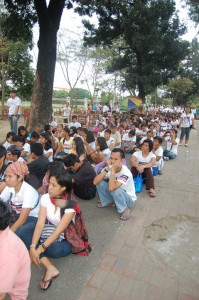 People from all walks of life were present: women’s groups, youth groups, health advocates, representatives from the academe… 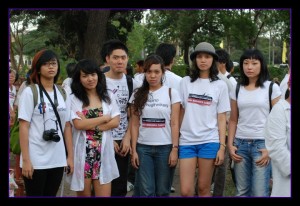 …and these random hipsters. The FF contingent was composed of over 30 members, including several newcomers like visual artist Jooley (extreme right). 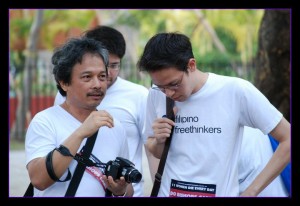 Arm (left), who has contributed several engaging articles on reproductive health and women’s rights on the FF website, was also present. 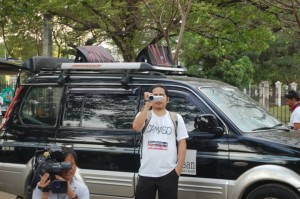 The Freethinkers’ main responsibility was to document the entire march. Dustin, for instance, was in charge of filming the supporters at the head of the line. Various news outfits, including Arabic news network Al-Jazeera, were also present to cover the event. 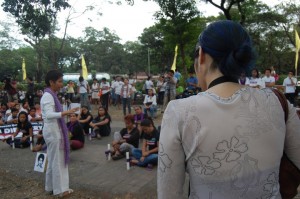 Representatives of RHAN’s sundry groups gave rousing speeches prior to the march, including Elizabeth Angsioco of the Democratic Socialist Women of the Philippines… 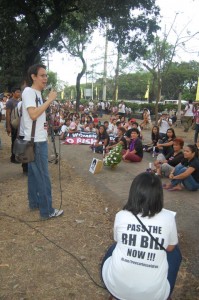 …and FF President Red Tani, who spoke about human rights and reproductive health in relation to the Vatican’s recent admission that priests from at least 23 countries (the Philippines included) have been sexually abusing nuns, with African priests, in particular, choosing nuns in order to avoid contracting the AIDS virus. 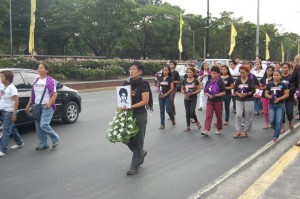 The march then commenced, with Mina Tenorio of Artists for RH Bill heading the pack, carrying a funeral bouquet and photograph of Olivia, just one of the countless casualties of the RH Bill delay. Olivia died quite young after giving birth to her tenth child, and her brood continues to be mired in poverty. 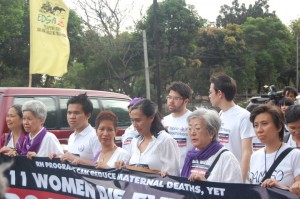 Representing FF at the head of the line were Red and Kenneth, who were also very active in the planning and organization of the event itself. Their bromance apparently knew no bounds. 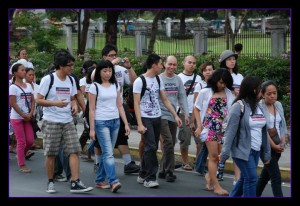 The FF contingent marched right along. 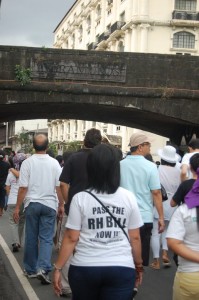 Soon enough, the supporters approached the entrance of Intramuros, Manila’s famed walled city and home of several bastions of Catholicism in the country, including the CBCP headquarters, the Manila Cathedral, and the San Agustin Church. 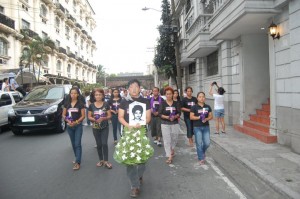 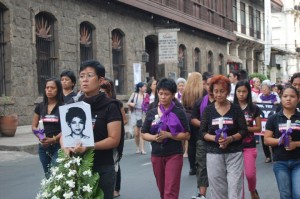 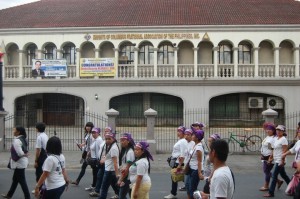 …the headquarters of the Knights of Columbus-Philippines, a Catholic fraternal service organization that is quite vocal in its stance against the RH Bill… 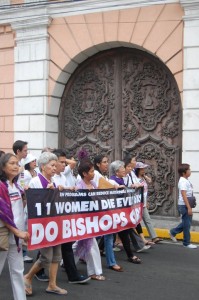 …and the San Agustin Church, the oldest surviving church in the Philippines. 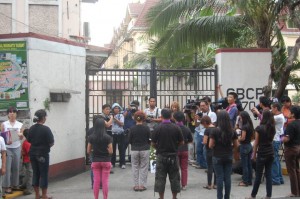 When the group arrived at the CBCP headquarters, 11 women clad in black, representing the said 11 women who die each day, positioned themselves directly across the gates. 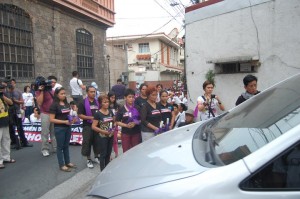 A few minutes after, a car from inside the headquarters rolled out. The persons inside could not be discerned through its tinted windows. Silently, the protesters allowed the car to pass. 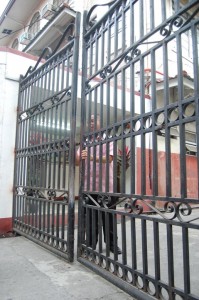 No representative from the CBCP arrived to address the protest, although a security personnel kept watch behind the gates. 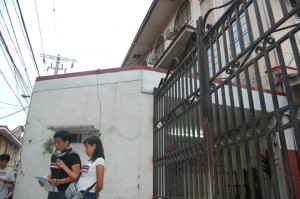 Ms. Tenorio then read out the group’s open letter to the CBCP, dictating to the silent compound within the fact that daily deaths occur due to the Church’s meddling, and the group’s desire for the CBCP officials to acknowledge the harrowing truth before them. 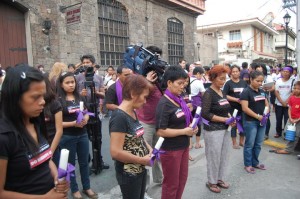 The group listened quietly to the message. A copy of this letter was then handed to the security personnel. 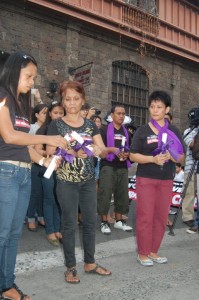 Afterwards, the women in black had their candles lit. Each flame represented a mother’s life. 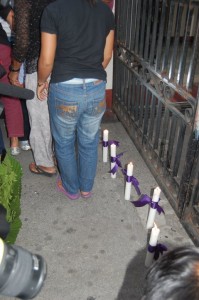 The women then placed their candles at the foot of the gates. 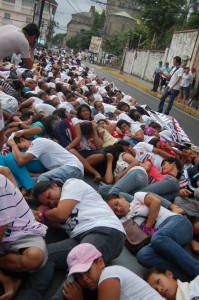 And then, silently and in unison, the protesters lay down on the ground in a massive “die-in,” as if to portray the thousands of Filipino women who die year and in year out, and to show their own unwavering support for the RH Bill. 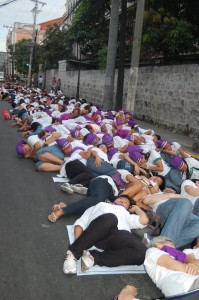 The “die-in” stretched all the way down several blocks. 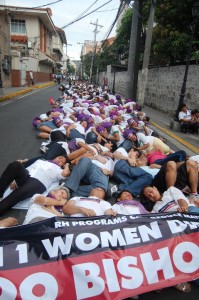 No one had any qualms curling up on the asphalt. 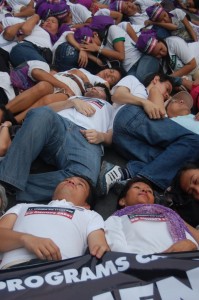 Everything was still for several whole minutes. 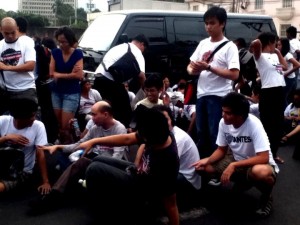 Finally, a signal was given, and the crowd got back on their feet. They then proceeded back to the entrance of Intramuros as silently as they had arrived. 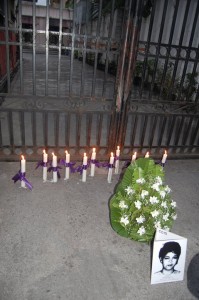 Left behind at the gates were the bouquet, the photograph, and the 11 candles, their flames bound to flicker out by the end of that day.

It was a peaceful protest from start to finish, and the participants dispersed in good spirits. RHAN and its supporters have quite stirringly expressed the truth to the Church, and it is now up to the men behind the gates to respond and do what is right.