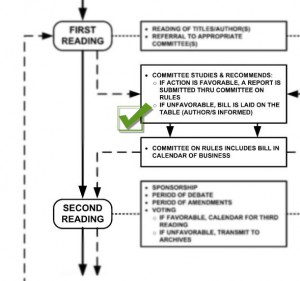 Earlier today, Congress’ Committee on Population and Family Relations voted to pass the consolidated Reproductive Health Bill to the second reading. With the committee voting 20 for approval, no objections and 3 voting with reservation, this is a strong message from congress persons involved with population and family issues that the RH Bill is a necessity.

In the 14 years that the RH bill has been fought for by people who are not afraid to own their morality (the CBCP be damned), the RH bill has yet to reach this stage in the legislature. This is historic and is a cause for celebration, but there is still a long road ahead.

In the legislative process, this moves it up one third of the process in one of three bodies involved in passing legislation. It’s a major hurdle cleared but there are so many more ahead.

The CBCP, of course, stands in the way. It has declared February as Pro-Life Month, kicking it off with a kick to our secular nation’s head by holding a pro-life mass at the House of Representatives. The RH opposition calling themselves “Pro-Life” is a bit of a misnomer though really. As Dr. Sylvia Claudio once quipped, it would be more accurate to call them pro-birth. Being “Pro-Life” people ourselves, look out for Filipino Freethinker events on February to reclaim the label from these unthinking dogmatists.

Though the RH movement has the implicit support of President NoyNoy lately his actions have been worrying. Opening up dialog with the CBCP should not have even been necessary. As a secular democracy, the government stance towards religious meddling with policy should be of virtuous indifference. The state should protect all religions equally but should not be constructing policy around the whims of any religion.

I was worried earlier when the CBCP claimed to be “elated” by the President’s Responsible Parenthood bill, the supposed compromise bill that the president wishes to push through rather than supporting the Reproductive Health Bill.

Pushing a watered down RH bill just to make some church men happy does the women of our country a great disservice. With the RH bill reaching this stage of the legislative process, the president should live up to his promises and put his full support behind the RH bill. Come on NoyNoy. This is not the time to compromise.

So yes. The RH bill is moving onto the plenary in Congress. This is an important milestone and even though there is still a long road ahead, we should celebrate this achievement. Onto the next level!