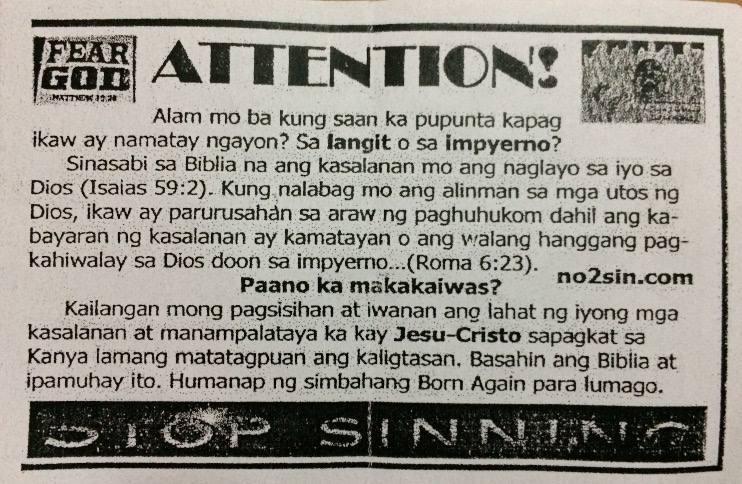 I’ve been to many pride marches but the most recent one in Marikina was the first time that I got to talk to one of the Christian protesters from the other side. His name was Koy, and we were able to have conversations about topics ranging from morality to epistemology. And although we may have disagreed strongly with each other’s conclusions, we didn’t devolve into a shouting match. I was listening intently to his arguments and I felt that he was also listening intently to mine.

I imagine that many people would say that I am wasting time trying to engage these so-called “fundamentalists.” To assume this, however, smacks of prejudice. I also think it’s not fair because it denies both parties a chance to learn from one another. If someone else knew that I was terribly wrong in my assertions, I would like that person to explain to me why, the same way that if I honestly believed that someone would go to hell for what they were doing, I would try my best to save their souls. Frankly, I have a bit more respect for these people who think they are saving other people from eternal damnation than for those who would rather watch other people burn in hell than have to endure social confrontation. I believe that they may be misguided, but I don’t think that they bear malice in their hearts, which is why I think it is unfair to characterize all of them as “full of hate”. Some of them may be, but definitely not all.

It is also quite unfortunate that quite a few people from the march started showing bad form when engaging the protesters, even going so far as to use their educational attainment to prove how they are on the “right side.” I think that this too is unfair and uncalled for, and does not help the cause, as it risks adding legitimacy to highly-educated fundamentalists as well as alienating less-educated members of the pride community.

Alas, not all discourse will go smoothly and there are inevitably cases where it’s best to disengage. What’s important is to be able to identify these cases as soon as possible. Let me give an example:

One of the protesters was shouting that there are no nonhuman animals who practice homosexuality. I tried to tell him that contrary to what he was saying, homosexual behavior has been widely observed in nonhuman animals. He then backtracked to say we shouldn’t be basing morality on animals, which wasn’t at all related to what I said, and actually nullified his original statement completely. When I tried to expound, he replied that I couldn’t possibly convince him of my point through discussion. And with that, I thanked him for his honesty and walked away.

Had I had more time, I would have loved to talk more to Koy about deconstructing the bible as a source of absolute truth and discussing studies about God as a projection of the self. The least I was able to do was hand him a bottle of water on the way back to my contingent. He asked me if I was sure that I wanted him to have it, us being on different sides of the event and all. I was a bit surprised at the question and just had to remind him: “Lahat tayo nauuhaw. (We all get thirsty.)“

This short experience of mine made me hope that we can all find the compassion in us to resist othering those we disagree with and instead find our common humanity. Let us engage each other as individuals who are capable of love and change, however slowly, however small.

Below are some shots from various pamphlets circulated around the event: