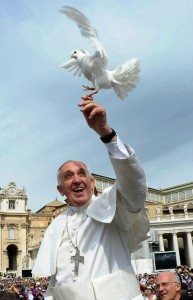 During his papal address last year at the St. Peter’s Basilica, Pope Francis made the call for peace a main point, noting that it was a common ground for believers and non-believers alike.

“I invite even nonbelievers to desire peace,” he said. “Let us all unite, either with prayer or with desire, but everyone, for peace.”

It’s a grand gesture from a pope who has become increasingly popular among Catholic moderates and non-Catholics alike, thanks to what looks like a reconcilliatory stance on formerly hot-button issues, such as homosexuality.

But as a new year begins and we’re bracing ourselves for what 2014 may throw our way, I’m wondering just how sincere the Pope was in his call for peace.

To start, I will establish what I believe.

I believe that part of any meaningful, lasting peace needs to be founded on the principle of equality. That the gauge of how well a community functions should be reflected in how it treats its marginalized and less fortunate. For us, a nation that’s survived three separate occupations from three foreign powers, this is a no-brainer.

It’s an idea that should be even clearer for the Roman Catholic Church, which continually reiterates its position as a bastion of peace and morality worldwide. Getting into specifics, I think that a truly peaceful society will make an effort to eliminate, or at least minimize instances of structural violence. Structural violence, as compared to blatant forms of violence such as murder or rape, is any inequality that is institutionalized.

And it is from this standpoint that I find myself questioning just how sincere the Church’s call for peace is, given how they figured in these incidents in 2013:

1. During the GOP’s US government shutdown last November 2013, the United States Conference of Catholic Bishops (USCCB) were among the groups pushing for the shutdown. The US bishops had been hoping to use this incident as political leverage to grant them exemptions from the contraceptive coverage included in the Affordable Care Act.

The resulting shutdown most directly affected the poor, which is especially ironic given that Francis’ latest speeches have been to renew the fight against poverty.

2. When the UN passed a resolution opposing violence against women, the Vatican, along with Russia, China, and Iran protested a section of the resolution that condemned violence committed in the name of religion, local customs, and culture.

3. Hospitals owned by the RCC are turning away women suffering from miscarriages, because the RCC’s moral guidelines forbid them from providing proper medical treatment or even advice if it has anything to do with birth control.

4. The Pope excommunicated Fr. Greg Reynolds, on the grounds that he talked about the ordination of women priests. Reynolds is also a known supporter of gay marriage, another issue that the church is currently opposed to.

5. Pope Francis himself has personally noted that the matter of ordaining women into the priesthood was not a matter for discussion.

6. Pope Francis had also encouraged Malta Auxiliary Bishop Charles Scicluna to speak out against gay adoptions, after the country introduced a bill that would allow same-sex civil unions, and children to be adopted by gay parents.

7. The Vatican recently refused to provide a United Nations panel with full information regarding its (the Vatican) clerical sex abuse cases worldwide. The Vatican also stiffened penalties against whistle-blowers.

Given these recent events, I would like to ask: Is the Vatican in the right to talk about peace when it is blatantly clear that it is partly responsible, if not complicit, in perpetuating the sort of violence most decent folks would prefer to eliminate from society? From Francis’ Urbi et Orbi address:

“True peace is not a balance of opposing forces,” Francis said. “It is not a lovely facade which conceals conflicts and divisions. Peace calls for daily commitment.”