For an institution that thrives on tradition and that loves talking up the long history of the Roman Catholic Church, the CBCP has sure demonstrated that they are open to expedient changes of heart when it comes to their own moral teachings.

This is an action that screams of frustration from an institution whose loss of power has just been demonstrated nationally, and it is also a demonstration of  the CBCP’s hypocrisy over its own moral dispensations.

During the Philippine elections of 2004, the head of the CBCP had issued a warning to priests against politicking for canditates, even invoking Canon law and threatening to strip guilty priests of their parishes.

And now in 2013, with the Bacolod diocese flaunting the Comission on Elections order to take down the posters and five more dioceses saying that they will join the Bacolod diocese in putting up Team Buhay and Team Patay posters, what is the CBCP telling its priests? That there is nothing wrong with what the diocese is doing. 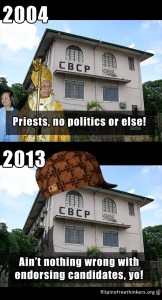 So much for moral consistency. But this is not the first instance of the CBCP flip-flopping on its own moral guidance when it suits them.

In 2005, when the CBCP was embroiled in the jueteng scandals, they had issued a moral teaching that their priests and bishops were not to take gambling money, even if it was to help the poor.

Fast forward to 2011, in another scandal involving the PCSO and SUVs, the CBCP issed forth the defense in the Senate that their bishops only took the PCSO money (which comes from a form of gambling) to… help the poor.

The CBCP demonstrates a pattern of flip-flopping on issues whenever it suits them, damn whatever moral utterances they may have made before. The CBCP may have their lists of Team Patay and Team Buhay, but they are clearly their own Team Balimbing.