On Posters and Poster Boy

So the whole Pedro Calungsod canonization thing did its damage and you’d think that it’s all over for now, right? Wrong. The Catholic Church, it would seem, is not content with digging into the pockets of its faithful. It’s now going to continue doing what it’s been doing pretty consistently for the past hundreds of years: breaching secularism.

Apparently, Pedro Calungsod paper bills are slated to go into circulation this year by none other than the Bangko Sentral ng Pilipinas. That’s right folks, they’re gonna be using state money to put their poster boy on, well, state money. State money, which I might remind you, came from citizens Catholic and non-Catholic alike.

All this blatant asking-for-money and spending-money-that-isn’t-even-theirs is really getting on my nerves, but not so much that I lose it and post something as tasteless as this video:

And as if that wasn’t enough, they exceeded their monthly political meddling quota by putting up a giant poster that tells Catholics who to vote for. Aside from endorsements, the billboard included a blacklist and both had lists of senators and party lists. As for what they used to separate the good from the evil, they looked to the handy dandy ever-black-and-whitening Reproductive Health Law. (And just in case you’ve been living under a rock, the Catholic Church is against this particular piece of legislation.) 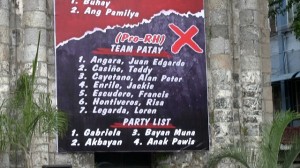 Personally, I appreciate their very anarcho-communistic choice of colors.

Although the Bacolod diocese that put up this tarp was ordered by the Comelec to take it down for being oversized, they chose to attempt a technical ploy and simply cut the poster in half. Assuming, however that the original poster really was 6 ft. x 10 ft. as reported, I’m having quite a lot of trouble understanding how the halves would fit into the prescribed 2 ft. x 3 ft. areas*. Oh, right! They don’t because it’s physically impossible.**

What wonders you can do with basic math!

It’s pretty telling, though, how the state’s reason for having the posters taken down is a mere issue of size when it’s a blatant violation of the requirements for tax exemption. The government seems to shy from the fact that the Catholic Church is not entitled to tax exemption, although they clearly act like it. To keep their tax-exempt status, they must comply with the law*** and only use their tax-exempt properties for their stated religious and/or charitable purposes. And to play in politics without having to pay the associated fees is simply not fair, especially given how this institution is chock-full of money. With this, I think it’s high time we started taxing the Church. Don’t you?

* The clauses that I’ve seen (online, at least) say “with an area exceeding two feet by three feet” while it’s enumerating “Lawful election propaganda”, which seems to be missing a “not” before the word “exceeding”. I’m just going to assume sloppy proofreading and not that our lawmakers have such horrible eyesight that they chose to ban anything smaller than 2 ft. x 3 ft.

** It’s pretty disappointing how nobody else seems to have seen or pointed out this technicality, even going so far as to imply that what the diocese did actually worked in this article.

*** Article VI Section 28 (3) of the Philippine Constitution states: “Charitable institutions, churches and personages or convents appurtenant thereto, mosques, non-profit cemeteries, and all lands, buildings, and improvements, actually, directly, and exclusively used for religious, charitable, or educational purposes shall be exempt from taxation.”

Tony Meloto and Faith in the Filipino