Why Miriam Quiambao Will Continue to be Ms. Universe in My Eyes

I love Arnold Clavio. I love how he handled his interview with Miriam Qiuambao and Naomi Fontanos (Chairwoman of Society of Transsexual Women of the Philippines) on the topic of transgender women being allowed to compete in the Ms. Universe pageant. Clavio kept the mood light, he did not show any bias or transphobia, and he asked the right questions.

I also love Naomi for not letting Miriam get away with her attempt to impose her version of the truth on Naomi. I love Naomi for standing up for transwomen and LGBT people. 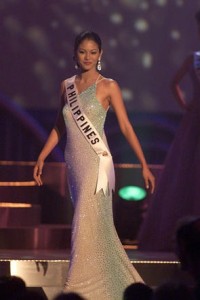 But most of all, I love Miriam for embodying what a beauty queen should be. Sure, she does not completely understand the difference between sex and gender. Sure, by saying that womanhood is determined by chromosomes, she has effectively misinformed her more than 250,000 Twitter followers. But I don’t take this against her. It is irresponsible, definitely! But she is a beauty queen, not a gender and sexuality expert. So chill out!

I also love Miriam for using her own masculine childhood experience of playing with soldiers and “going on adventures” and how it did not turn her into a man. And of course, I agree that just because you played with dolls when you were young, it doesn’t mean you will become a woman. I’m not quite sure where she got this line of thinking but hey, beauty queens will be beauty queens. So don’t worry girls, you can do boy stuff and still be a beauty queen when you grow up. Take it from Miriam!

And I just love how she constantly used her faith throughout the discussion. Sure, it was arrogant of her to say that she knew the truth and Naomi didn’t. Hell, she was practically telling Naomi that Naomi’s entire life was a big lie! Sure, she probably doesn’t know that the existence of an absolute truth has been debated by philosophers for so many millennia. But on stage, “Leave it to God” will earn you more beauty queen points than “The truth in a particular context – (is) a statement that is known to be correct —ie. in accord with reality, as corroborated by evidence or related experience.”

So do I hate Miriam Quiambao? Of course not! This whole fuss just reinforced my original belief that beauty pageants should just be abolished in the first place. Miss Universe is run by a rude, disrespectful, macho businessman who cares about ticket sales — not gender equality. If it has to do with gender at all, it perpetuates gender stereotypes. It objectifies women and reduces beauty to being young, single, and infertile (read: get older than 27, marry your partner, or get pregnant and you are disqualified).

Do I love Miriam? Of course! Well, maybe not as much as before but I am still a huge fan of her outer beauty. You could say I’ve lost hope in her when I saw how things turned out after I wrote her an open letter. But when the dust has settled, when people start overreacting to other news, when we start getting used to small steps that lead to social change, I will continue to be amazed by Miriam’s statuesque pose. I will still watch Miriam get clobbered by Eugene Domingo in Kimmy Dora Part 2. And yes, Miriam Quiambao will continue to be Ms. Universe in my eyes!