Logical debate is a necessary part of every activist’s life. But before engaging in a debate, make sure you ask yourself the following questions:

1. Do I know the subject? – For seasoned activists, this should be a given. But for newbies, it is normal to romanticize passion and equate it with victory. If you don’t think you can pull it off, leave it to the experts. If you think you can, make sure you have information handy.

2. Are my objectives realistic? – If you are about to argue with a religious fundamentalist with the intent of convincing the person to turn against faith, you might as well argue with a 10-foot tall slab of concrete. As a personal policy, I never engage in debate to win. I engage to educate and to learn.

3. Are we both clear on the parameters? – At the onset, make sure both of you know the rules. I generally do not engage if I know that Bible verses will be used against me. It defeats the purpose of a logical debate. But for some people, that is perfectly fine. So know what parameters work best for you.

4. Can I document the whole discussion? – If you can’t document the discussion, then be prepared for a lot of moving goalposts (discussed later). Documenting the discussion ensures that both of you have a way of getting back on track. It’s also a nifty way of catching contradictions.

5. Will this do more good than harm? – Sometimes, winning an argument will actually put you in a worse position or result in more damage to your cause. Be selective. Choose your battles. 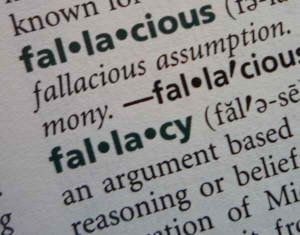 If you answered “yes” to all these questions, then I present to you ten commonly used fallacies and what to do when they are used against you in logical debate (actual quotes from actual debates are found here):

Fallacy #1: Appeal to Nature – “This is the fallacy of assuming that whatever is “natural” or consistent with “nature” (somehow defined) is good, or that whatever conflicts with nature is bad”

What you can do: Aside from explicitly calling out that this is a fallacy called “Appeal to Nature,” you can also point out that it is in our nature to get sick and eventually die. This means that preventing death and sickness from happening is unnatural. And yet we don’t consider modern medicine and doctors as “bad.”

Fallacy #2: Appeal to Popularity – “The basic idea is that a claim is accepted as being true simply because most people are favorably inclined towards the claim.”

“I am against same-sex marriage because a majority of the population is against it.”

What you can do: As with the first fallacy and all the succeeding fallacies, it is a must that you call out what kind of fallacy the person is using. And then point out that in the past, a majority of the population also believed that the world was flat and the earth was the center of the universe. Both arguments turned out to be false. If you are in the US, you can also point out that last April, same-sex marriage supporters outnumbered the opposition for the first time. Unfortunately, we have no such survey in the Philippines yet.

What you can do: State that slavery was also acceptable for more than 2000 years but that does not make it right. Also state that the 2000 year old definition of marriage has already been redefined a decade ago when same-sex marriage was made legal in the following countries: Argentina, Belgium, Canada, Iceland, the Netherlands, Norway, Portugal, Spain, South Africa, and Sweden.

Fallacy #4: Cherry Picking – “Cherry picking, suppressing evidence, or the fallacy of incomplete evidence is the act of pointing to individual cases or data that seem to confirm a particular position, while ignoring a significant portion of related cases or data that may contradict that position.”

PERSON A: “Laws are based on natural moral standards”

PERSON B: “Then why did the Supreme Court disallow Comelec to use morality in denying Ladlad accreditation?”

PERSON A: “The Supreme Court respected Ladlad’s right to freedom of expression.”

*It is true that the Supreme Court cited the right to freedom of expression. But what PERSON A conveniently left out was that the Supreme Court’s ruling against the Comelec also included “Public Morals” as an invalid ground for blocking Ladlad, thereby disproving PERSON A’s original claim.

What you can do: Refute the claim by presenting the rest of the facts that the person left out. The complete and original text of the Supreme Court’s decision on the Ladlad vs Comelec case is available online. But put simply, the Supreme Court disallowed the Comelec to use Public Morals and Religious Belief to deny Ladlad accreditation. This is important jurisprudence because it tells the public that the use of morality and religion in deciding state affairs is unconstitutional.

Fallacy #5: False Analogy – “A false analogy is a rhetorical fallacy that uses an analogy (comparing objects or ideas with similar characteristics) to support an argument, but the conclusion made by it is not supported by the analogy due to the differences between the two objects.”

What you can do: Explain why the analogies presented are not similar to the original argument. In this case, the family code of the Philippines requires legal consent from both parties, which minors, the mentally handicapped, and pets cannot provide. And then avoid analogies entirely because if they are not used smartly, they have the tendency to backfire.

Fallacy #6: Moving The Goalpost – “The “Moving the Goalpost” logical fallacy is another one that has a fairly descriptive name. It is the case when Person A makes a claim, Person B refutes it, and Person A moves on to a new or revised claim, generally without acknowledging or responding to Person B’s refutation. Hence, the goalpost of the claim has been shifted or moved in order to keep the claim alive.”

PERSON B: “But earlier, you said same-sex marriage causes moral relativism, not the other way around.”

PERSON A: “No, what I meant was same-sex marriage reinforces moral relativism. I admit that is was poorly constructed because I was in a hurry.”

What you can do: Keep track of how many times the person moves goalposts. If the person does this often enough, faulty logic will soon expose itself. The key here is documenting the entire conversation.

Fallacy #7: Presenting Opinion as Fact – “In casual use, the term opinion may be the result of a person’s perspective, understanding, particular feelings, beliefs, and desires. It may refer to unsubstantiated information, in contrast to knowledge and fact-based beliefs.”

“Laws are based on natural moral standards”

What you can do: Assert that in the absence of facts, all you have is opinion. But be cautious, too, because not all facts are from credible sources. Prefer facts over stats because stats can be manipulated depending on who is doing the study.

Fallacy #8: Red Herring – “A Red Herring is a fallacy in which an irrelevant topic is presented in order to divert attention from the original issue. The basic idea is to “win” an argument by leading attention away from the argument and to another topic”

PERSON A: “It is not true that homosexuals were not allowed to run for public office”

PERSON B: “Ladlad was barred by Comelec”

PERSON A: “The Comelec didn’t just bar Ladlad because of homosexuality because that is oversimplifying the position. Just look at gay pride marches. It is embarrassing. But I’m not saying that just because homosexuals behave that way, they can be discriminated against. I don’t understand why people assume that just because I think homosexuality is disordered that I automatically want to bully homosexuals. That’s pretty immature.”

What you can do: Acknowledge the new information presented. But make sure that your acknowledgement is not taken as agreement. State the exact same question for emphasis before the red herring was thrown at you. Again, this is why documentation is key.

Fallacy #9: Slippery Slope – “The Slippery Slope is a fallacy in which a person asserts that some event must inevitably follow from another without any argument for the inevitability of the event in question.”

“Same-sex marriage will cause population implosion.”

What you can do: Ask “how” and ask for facts just a few repetitions short of ad nauseam. Let them ramble and eventually, they will run into self-contradictions. In which case, be ready for more moving goalposts and more red herrings.

Fallacy #10: Spotlight Fallacy – “The Spotlight fallacy is committed when a person uncritically assumes that all members or cases of a certain class or type are like those that receive the most attention or coverage in the media.”

What you can do: State factual evidence to the contrary. From an international perspective, the United Nations recently released its first report on LGBT rights. You can also download the Philippine LGBT Coalition report (which I co-authored Ü) to the UN’s Universal Periodic Review. It is a good resource for citing actual documented discrimination against LGBT people in the Philippines.

These are just some of the common fallacies I’ve encountered recently. If you know of more or have found other effective ways of handling them, help our readers and post your experience here.

“Pure logical thinking cannot yield us any knowledge of the empirical world: all knowledge of reality starts from experience and ends in it.” – Albert Einstein, 1954″