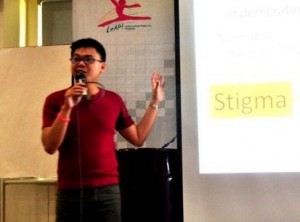 On October 27, the Statement of the Psychological Association of the Philippines (PAP) on “Non-Discrimination Based on Sexual Orientation, Gender Identity and Expression” was made public on PAP’s website.

According to the website, PAP’s non-discrimination statement aims to “eliminate stigma, prejudice, discrimination and violence against LGBT (Lesbian, Gay, Bisexual, and Transgender)” people by supporting efforts to:

• oppose all public and private discrimination on the basis of actual or perceived sexual orientation, gender identity and expression;

• repeal discriminatory laws and policies, and support the passage of legislation at the local and national levels that protect the rights and promote the welfare of people of all sexual orientations and gender identities and expressions;

• eliminate all forms of prejudice and discrimination against LGBTs in teaching, research, psychological interventions, assessment and other psychological programs;

• encourage psychological research that addresses the needs and concerns of LGBT Filipinos and their families and communities;

• disseminate and apply accurate and evidence-based information about sexual orientation and gender identity and expression to design interventions that foster mental health and wellbeing of LGBT Filipinos.

A Society of Tolerance not Acceptance

The statement includes a general list of how LGBT Filipinos still experience stigma, prejudice and discrimination in Philippine society such as “bullying, teasing and harassment of LGBT children and adolescents in families, schools and communities; media portrayal of LGBTs as frivolous, untrustworthy and even dangerous or predatory; denying transgender Filipinos entry into commercial establishments; pigeonholing LGBT Filipinos into particularly limited roles and occupations; or curtailing their rights to participate in the political sphere.”

The release of this statement traces its roots all the way back to the beginning of 2011. In February, a PAP-certified clinical psychologist guested on the morning show Umagang Kay Ganda (Beautiful Morning) and stated on national TV that LGBT people can become straight and achieve a happy life by going through therapy.

According to Eric Julian Manalastas, an assistant professor of Psychology at the University of the Philippines – Diliman and a member of the PAP, this was a “misleading, inaccurate, and unethical statement.” It prompted him to write to PAP to ask the organization to take action on the matter. On October 8, the board of directors approved a statement that Manalastas drafted along with Prof. Jay Yacat, a professor from the same university.

But the long journey doesn’t stop with the statement’s approval. “…when I saw it finally released on the official PAP mailing list and the website, I was thinking, wow now the work begins,” said Manalastas. He expects that out of the several commitments, the last one (disseminate and apply accurate and evidence-based information about sexual orientation and gender identity and expression) will have an immediate effect on the lives of LGBT Filipinos. “I would like to see all Filipino psychologists know that diversity in sexual orientation and gender identity is a compelling reality of human life…and that they apply and share this knowledge when they teach students, do research, talk to the media, and deliver professional services like counseling and therapy,” he added.

Manalastas said he got a lot of personal satisfaction when the statement was released. He holds a strong connection to the issue as he and Yacat personally worked on the statement together until its approval. Despite the long journey and the challenge posed by society, Manalastas seemed hopeful and shared that “though few compared to in other countries, Filipino psychologists are well-placed (in schools, universities, organizations, clinics, etc.) and have a good opportunity to impact directly on the well-being, self-esteem, and personal identity of LGBT and non-LGBT Filipinos.”