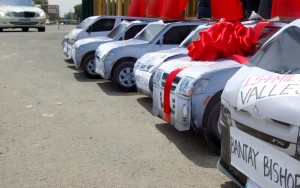 Make no mistake: The recent PCSO scandal violates the separation of churches and state. Yet some, including several senators, think that the PCSO and Catholic bishops weren’t doing anything wrong. By the end of this article, I hope you’ll agree: In every donation the bishops received from the PCSO, secularism was undoubtedly, unquestionably, and unmistakably violated.

First, let’s review the relevant rules regarding the PCSO donations:

Consider the first rule. Does it make any qualifications? Does it say “public money should not be used for a religious group except when the money is used for secular purposes”? No. (Atty. Raul Pangalangan shares the same sentiment.)

Given this, we can now create two questions that test whether there were violations in the use of PCSO funds by the Catholic bishops:

With these questions in mind, let’s begin with the Tuguegarao case. In Cagayan, the PCSO gave the Archdiocese of Tuguegarao P200,000 for the operational expenses of a retirement home for priests. The PCSO gave an unknown amount for “finishing touches” on the renovation of the said retirement home.

I’d be interested to hear a rebuttal of this case, especially by the senators who hastily accepted the bishops’ innocence and apologized for their involvement in this scandal. Will they be less apologetic when they learn that the Archdiocese of Tuguegarao didn’t even need the funds, because it had more than P100M invested in San Miguel and Ayala?

The Tuguegarao case should be enough to clear any doubt that there was a constitutional violation, and it’s unfortunate that this hasn’t come up during the investigation.

Let’s move on to the next violation: the bishops purchasing Sacred Utility Vehicles (SUVs). (I redefined the acronym because, as some have furiously pointed out, not all of the vehicles are Sport Utility Vehicles.)

Some people seem to think that it’s OK for the bishops to receive SUVs as long as they are used for charity work. I’ve already explained that the Constitution does not care what the funds are used for; that a religious group received the funds is already a violation.

But even if we grant for the sake of argument that the funds (and SUVs) can be used for charitable purposes, at least one bishop implicitly admitted that it was used for more than that.

Consider what Bishop Pueblos said in reference to returning his Montero Sport:

“I don’t see any problem with that. I am riding a very old vehicle within the diocese itself. I could even ride a small vehicle if it is necessary. It will not really be a problem,” Pueblos said.

Think about it. If the Montero Sport were only being used for medical assistance or charity work, this is not what Pueblos would have said. He would have said something more like the following:

“I will return the vehicle, but it’s too bad. People in hard-to-reach barangays will not receive the medical assistance they so badly need. We don’t have any vehicle that can cross the tough terrain, so we’ll have to immediately start looking for one.”

But no. Pueblos said that he would use the “very old vehicle” and that he “could even ride a small vehicle.” (Because, you know, anything that’s not a Montero is small.)

The birthday bishop’s statement tells us that the Montero was primarily for his use, and non-sanctioned use of the Montero is a violation, regardless of whether he used it to go to the market or go to Mass. And does anyone seriously think that every trip Bishop Pueblos took on the Montero was a medical mission?

The statement also tells us that Pueblos didn’t need the Montero after all. If a very old vehicle or a smaller vehicle could have done the job, it means that he didn’t have to ask for the P1.7M birthday gift from GMA; even if he needed a car, it didn’t have to be a Montero.

In addition to the Tuguegarao case, this is also a clear violation. And I highly doubt that the other bishops used their SUVs only for charitable purposes. But let’s pretend for the sake of argument that the SUVs were used exclusively for medical missions. Would it still be a violation of secularism? Yes, and here’s why.

As I’ve explained earlier, the Constitution categorically states that public money should not be given to religious groups, regardless of what the religious group does with it — there are no exceptions.

Senator Miriam Santiago argues that this is not the case, and she brings up a 1937 case to make her point:

The post office issued postage stamps commemorating an international Eucharistic congress of the Catholic Church. The issue was whether the stamps used public money for religious purposes, thus violating the Constitution. The Supreme Court ruled that there was no violation.

Sen. Santiago goes on to explain a threefold test to check whether there was a constitutional violation. But as Atty. Raul Pangalangan explains, the threefold test does not even apply in this case:

Here we don’t even get to apply that test. What is at stake is not the broad language of the Establishment Clause (“No law shall be made respecting an establishment of religion ….”) but the specific and prohibitory language on the religious use of public funds (“No public money ….”). In interpreting laws, the specific and the prohibitory prevail over the general and the permissive. As the saying goes, “What part of ‘no’ don’t you understand?”

And for someone who said that “the COA report is wrong … there was no constitutional violation,” Sen. Santiago comes to a surprising conclusion:

PCSO management apparently admitted that it has not given similar donations to any other religion. If so, then PCSO management appears to be giving preference to the Catholic religion, and that would be a violation of the Establishment Clause.

Sen. Santiago concludes by calling for the investigation of the “maleficent twisted genius” who invented “Pajero bishops.” I wouldn’t mind the Senate investigating this.

But senators, please get your priorities straight. There are more things that deserve further investigation. What about the violations of the Establishment Clause made apparent by PCSO’s admissions? What about the possible violations committed from 1986 – 2007, when, according to the CBCP, receiving donations from the PCSO became standard practice? What about the unsanctioned usage of the SUVs as Pueblos has implicitly admitted? And what about the blatant violations in the Tuguegarao retirement home for priests?

As I said in a recent interview, the investigation into the bishops’ involvement in this scandal appears to have been done in haste. The excessive respect shown by the senators toward the bishops borders on devotion, and this has undoubtedly affected their objectivity. I hope the more sensible Senators remind their more pious colleagues that the bishops’ reputations are less valuable than the Blue Ribbon Committee’s integrity.

For the latest Philippine news stories and videos, visit GMANews.TV