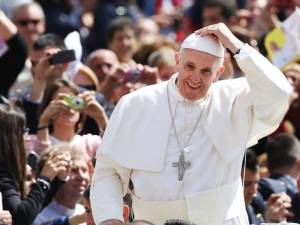 I’m going to say something many of my fellow secularism advocates would probably not appreciate: I like Pope Francis.

I like Pope Francis because, in my opinion, he is more liberal than many liberals. American conservatives already hate him for his seemingly liberal position on many issues. He’s so liberal that Sarah Palin is actually taken aback by what she calls his “liberal agenda.” The Pope is so liberal that writer Damian Thompson, in an article he wrote for “The Spectator,” had to ask if we were in the early stages of a Catholic civil war.

Apparently, even Catholics think the Pope is too liberal. Fr. Dwight Longenecker writes:

“Some have given up on Pope Francis. Others say he is ‘the false prophet’ who will accompany the anti Christ in the end times. Others don’t like his dress sense, grumble about his media gaffes and some think they are all intentional and that he is a very shrewd Jesuit who wants to undermine the Catholic faith.”

I like Pope Francis because he openly criticized Capitalism and even compared it to “the worship of the ancient golden calf”:

“Some people continue to defend trickle-down theories which assume that economic growth, encouraged by a free market, will inevitably succeed in bringing about greater justice and inclusiveness in the world. This opinion, which has never been confirmed by the facts, expresses a crude and naïve trust in the goodness of those wielding economic power and in the sacralized workings of the prevailing economic system.”

I like Pope Francis because he did a lot of cool stuff in 2013.

Mark Pygas wrote an article about the Pope in Distractify and among the highlights include:

He criticized the Church’s frivolous spending. He let a boy with Down’s Syndrome ride the Popemobile. He denounced the judgment for homosexuals. He encouraged the protection of the Amazon Rainforest. He acknowledged that atheists can be good people. He condemned the global financial system. He amended the Vatican law to make sexual abuse of children a crime, and also established a committee specifically to fight that kind of abuse. He declared that the Church has an unhealthy obsession with abortion, gay marriage, and contraception. He broke tradition by performing the ritual washing of feet on women and Muslims.

I like Pope Francis because the things he did, which earned him “Person of the Year” honors, are things that I have, in my own little way, been trying to do as well: denounce judgment for homosexuals; bust myths about the “evil” atheists; criticize corporate greed, government corruption, and the sexual abuse of children by the clergy; point out the Church’s irrational position on abortion, gay marriage, and contraception.

The Pope and I are like bros, you see? We have been supporting some similar advocacies, the only difference is, he does it even better than I do – with a much bigger platform and with greater effect.

I can honestly say that Pope Francis did a lot more for secularism than many advocates of secularism, including me.

Because of the Pope, it’s now extremely easy for me to discuss evolution and the Big Bang with Catholics. Before, they could just avoid the conversation entirely, claiming that it’s a “matter of religious belief.” Now, I can conveniently remind them that the Pope, the leader of their religious affiliation, agrees with me.

Apart from those, I also like that the Pope “revised” the Ten Commandments:

2. “Be giving of yourself to others.”

4. Develop a healthy sense of leisure.

5. Sundays should be holidays.

7. Respect and take care of nature.

Now, before our readers declare me as a gullible, atheist, Pope-fanboy, I should clarify that I’m not declaring the Pope as the second coming of Chuck Norris. As much as I like him personally, I’m aware that there are reasons to get off the bandwagon.

In the article, “5 reasons you should stay off the Pope Francis bandwagon,” writer Timothy McGrath provides a breakdown of “concerns” regarding Pope Francis. McGrath reports that:

1. There are unanswered questions regarding the Pope’s inaction during the Dirty War in Argentina.

3. The Pope’s current views on abortion and gay marriage is inconsistent with his previous stance.

4. The Pope continues the “inquisition” against American nuns.

5. The Pope may have performed a live exorcism.

And it seems too, that the Pope has recently backtracked on his liberal stance. Nick Squires, in his news article, “Pope: Children Need Mother and a Father,” reports that:

“Pope Francis appeared to bow to pressure from Catholic conservatives on Monday when he delivered a robust affirmation of the importance of the traditional family.”

I think that’s a little disappointing, but I’m still giving Pope Francis the benefit of the doubt.

Some people think that Pope Francis is just an extremely talented, one-man Catholic propaganda machine. I’m not ruling out that possibility. It’s entirely possible that he has an army of publicists and public relations specialists that script every single response and gesture that the Pope makes, even when cameras are not around, in order to convince the world that he is a good person.

If that were the case, he’s been doing a really good job. In fact, he seems to do it without much effort, which leads me to think that maybe, just maybe, he’s just a regular good person who just happened to be Pope.

I’m rather ashamed to admit that I tried very hard to hate the Pope as soon as he was elected. I wanted to hate him, not because of anything he did (he hadn’t done anything yet when I first decided to hate him), but simply because of a personal bias. I didn’t like the Pope, because I don’t like Catholicism, and the Church, and anything that is associated with what I consider to be symbols of oppression and subjugation. I didn’t like the Pope, because he was supposed to be the bad guy. I didn’t like the Pope because I was prejudiced.
In my desire to criticize religious organizations and promote my own agenda, I became similar to the homophobes who would hate someone just because they were gay, or self-righteous bigots who would assume the worst of atheists just because they were atheists. I hated the Pope just because he was Pope, and it was wrong of me to do so.

When I asked myself, “If Pope Francis weren’t Pope, would I like him as a person?” I realized that I like him.

He has a Master’s Degree in Chemistry. He believes in the Big Bang and evolution. He thinks atheists can be good people. He says that the Church shouldn’t be so obsessed with abortion, gay marriage, and contraception. He’s not afraid of the mafia. He doesn’t like capitalism and America thinks he’s a Marxist.

I realized that the only thing I didn’t like about him was the fact that he was Pope. If he were my college professor, or my neighbor, or my boss, I would probably like him. In fact, if I were single and the Pope was a girl around my age, I would totally ask her out.

So, I guess I’m an agnostic/atheist who’s a fan of the Pope. Is that weird?