As you’re reading this, the Philippine Supreme Court will be having the oral arguments regarding Republic Act 10354 or the Responsible Parenthood and Reproductive Health Act of 2012, aka the RH Law.

One of the people expected to make an appearance at the proceedings is former Senator Francisco “Kit” Tatad, a man who has been frequently touted by the Catholic Church as one of its champions in opposing the RH Law.

Tatad has figured prominently in the opposition to reproductive health in the years leading up to the law’s passing last year. He’s also among the petitioners that was the cause for the SC to impose an SQA on the RH law.

In this article, we’ll be taking a look at the Tatad petition, since it makes use of the most common arguments that the RCC loves to resort to in opposition to reproductive health. Tatad starts off his argument by citing every Filipino’s right to personal and family privacy:

…Which is not an issue at all, since this is also what the pro-RH side of the Philippines supports – the right of privacy of every family regarding their sex lives. Tatad’s points on a family’s right to birth control methods of their choice are equally sensible: 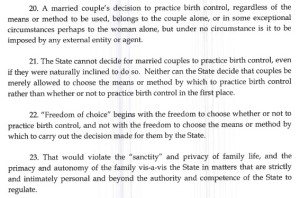 Once again a fair point. Birth control should be a decision left up to each family. It is a decision that cannot be forced upon them, either by the state, or anybody else. However, shortly after making several valid points on the rights of the Filipino family, the petition starts treading water… 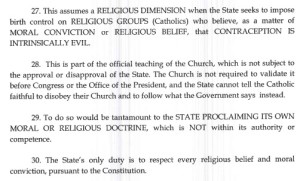 First off, there is nothing in the RH law that forces families to choose a specific birth control method. Quoting section 2, sub-section h of the RH law:

(h) The State shall respect individuals’ preferences and choice of family planning methods that are in accordance with their religious convictions and cultural beliefs, taking into consideration the State’s obligations under various human rights instruments;

What the RH law will provide is family planning medicine and education, and leave the decision on which method is ideal for each family’s circumstances up to the family itself. Accusing the RH Law of forcing a family to choose is no more valid than a creationist accusing public education of “forcing” kids to go against their religious beliefs by teaching evolution in science class.

If your religious beliefs say contraceptives are wrong, then don’t take contraceptives. Nothing in the law says you must pop the pill just because you sat through several sex education classes. How hard is that to understand?

Secondly, so what if the Catholic Church considers contraceptives “evil”? Just as they state that government cannot impose specific beliefs, Tatad and company cannot impose Catholicism on other people who do not agree with their hypocritical moral stance on reproductive health.

Which brings us to the next point…

What is ironic here is that in demanding that the SC junk the RH Law because it goes against their religious beliefs, Tatad’s petition is basically denying the RH law to everybody else in the Philippines.

Okay, fine. So Tatad wants the law junked because it goes against his religious beliefs. But what about the Protestant churches who support the RH Law? What about the Muslim community? What about his fellow Catholics, the majority of whom are also calling for better access to reproductive health education and medicine?

It’s become clear at this point that the message Tatad sends is that he only cares about shoving HIS religious dogma down the throats of everybody else who does not agree with him.  This is not the first time people like him pulled a stunt like this, sadly, as the cases of Manila and Ayala Alabang show.

This intent becomes especially obvious when you consider that the sex education program being proposed is targeted at public schools – where religious groups are not allowed to impose their dogma.

Moving along, the petition gets even more brazen in its religious intent: 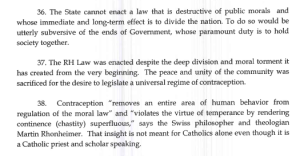 Does Tatad have any empirical evidence proving that introducing contraceptives “destroys” morality? A study that directly correlates crimes rates with increased access to birth control education and contraceptives would be a good start.

On the other hand, the studies we do have available show conclusively that lack of access to RH medicine and education has resulted in a rising trend in teen pregnancies and STDs. But since it’s women suffering – and the RCC’s known for disregarding their welfare on more than one occasion – I guess that doesn’t count.

And as if Tatad should be one to talk about “deep divisions” and “moral torment”, given that it was his side of the RH discussions that has been demonizing supporters of RH, by spreading outright lies and slander, to resorting to outright threats of violence.

This is no different from a bigot claiming that making gender equality a social norm is provoking “moral torment” because now everybody’s calling him out for being an ass.

Then again, as the former press secretary of the Martial Law years, I guess Tatad knows a thing or two about inflicting moral torment on society.

These are just some of the more glaring flaws I managed to dig up from Tatad’s petition against the RH Law. Any and all feedback or additional insight are always welcome here in the comments thread, or over at our FB fanpage.