Update: Sotto has since denied that he is against LGBT provisions in the anti discrimination bill. The point still stands, other senators who are against these provisions are calling for discrimination to pass the bil.

Manila Bulletin reports that certain senators are opposing the Anti-Racial, Ethnic and Anti-Religious Discrimination Act of 2011 (the Anti-Discrimination bill) because they want the provisions concerning the LGBT struck down. Among these senators is our favorite bigote’d senator, the Honorable Vincente Sotto III.

“Kaya pala nadedelay sa Senate na mag-agree sa bicameral ay pinapa-negotiate ng some Senators na alisin ang provisions ng LGBTs. (The reason why the Senate failed to agree in the bicameral is that some senators wanted to exclude the LGBT provisions),” [one of the authors of the bill, Rep. Teodoro Baguilat Jr.] claimed.

“So baka mag-agree na ganito na lang para maipasa. What I know is that one of those opposing is Senator (Vicente) Sotto,” he claimed. Sotto was reportedly pushing for the adoption of the House version, which does not include the LGBT provisions.

The legislators who authored the anti-discrimination bill have done good work writing the bill in the first place. Now they need to ensure that their good work will not be brought down by the politicking of bigots and bishops. 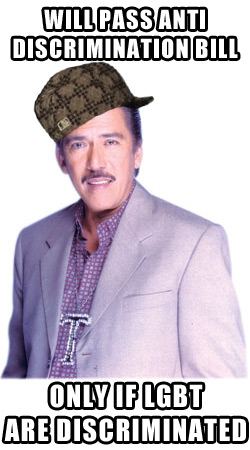