Bad Father or Evil Politician: Did Sotto lie about his son’s death? 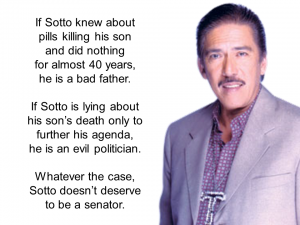 Despite his patent lies and his staff’s excuses, Sotto’s plagiarism  is now an established fact. They have even changed their defense to plagiarism being an acceptable practice for Senators. I’d first thought that Sotto was alone in his stupidity, but it appears even Sen. Santiago thinks the Senate is exempted from academic standards of honesty.

But all this talk about plagiarism has overshadowed the most controversial part of Sotto’s recent speech: his claim that oral contraceptives killed his son. Some critics have hesitated to attack this claim, and those who haven’t, such as former health secretary Esperanza Cabral and Rep. Janet Garin, have taken flack for even entertaining the idea that Sotto would lie about something as serious as his own son’s death.

But since Sotto, a public official, has entered his personal tragedy into public record, it is fair game to consider the possibility that Sotto is lying. And I believe this is precisely what he did. Sotto is lying about the death of his son to further his fight against the RH Bill. Many of his statements and actions — these past weeks and even during his entire career — point to this conclusion.

1. Sotto lied about the pill his wife was on.

Sotto said his wife was taking Diane in 1975. Diane was introduced in 1978. This is the kind of detail you never forget. Rather than an honest mistake, he is probably lying.

Back in high school I got contact dermatitis (eczema). Today, almost two decades later, I still remember the name of the ointment I was prescribed by my dermatologist: dermovate. It came in a small green tube, and you could also get it in a more expensive cream version.

Sure, Sotto’s tragedy happened much earlier. But all I got was a bad summer; his son died. You’d think that such tragedies etch every minor detail into memory, especially the name of his son’s killer. Could Sotto have forgetten this? I don’t think so.

2. Sotto lied about his medical sources.

The first time Sotto defended himself from plagiarism allegations, he denied it. He asked, “Why should I quote a blogger?” He explained that he and Sarah Pope were reading the same author, and that’s who he’s citing. This defense was echoed by his chief-of-staff, Atty. Hector Villacorta.

Again, Sotto and Villacorta were lying. They have already admitted to not even having a copy of the book, using Pope’s blog to indirectly (but incorrectly) cite McBride.

So as far as we know, all those years blaming contraception for his son’s death was because of his physician, Dr. Carmen Envarga-Santos, who has passed away and can no longer confirm or deny Sotto’s claim.

Thankfully, her family is still around and has said that if Dr. Envarga-Santos were alive, she would be pro-RH. And I don’t doubt that she’d be furious that Sotto is using her reputation to argue against contraception.

Sotto learned 37 years ago that oral contraceptives killed his son. Let’s assume for the sake of discussion that his wife was on the pill (some pill that actually existed back then) and that he was really told that the pill killed his son by his doctor (who was pro-RH but rather incompetent, at least in this story). If that were true, Sotto has done nothing for almost 4 decades to fight his son’s killer.

And it’s not like he didn’t have the opportunity. He was already a TV host in 1975. He could have used his celebrity status to raise awareness about the dangers of oral contraception. But he didn’t.

He became vice mayor of Quezon City in 1988. He could’ve restricted access to oral contraception (the way it was done in Manila). But he didn’t.

He became senator in 1992. He could’ve proposed a bill to ban oral contraceptives (or at least add “birth defects of future children” to the list of complications found in every box of pills). But he didn’t.

He led the Dangerous Drugs board in 2008, and he could’ve included oral contraceptives on that list. But he didn’t.

What kind of man is Tito Sotto?

Sotto has done nothing for 37 years, waiting for the very moment the RH Bill is on the verge of passing, to reveal one of the most damaging details about oral contraceptives that even those on the anti-RH side has failed to discover. The way I see it we can interpret this in one of two ways:

Either Sotto is a bad father, who has realized just now that he owes it to his son, his family, and his constituents to reveal the truth about his son’s killer so that they could avoid a similar fate.

Or Sotto is an evil politician, willing to do anything to block the RH bill, which includes plagiarizing and twisting the words of writers, tarnishing the reputation of physicians who can’t defend themselves, and lying about the death of his own son.

Whatever Sotto is — a bad father or an evil politician — he does not deserve to be a senator.