One classic rhetoric the Catholic Church loves to throw around is that “secular media” is a leading cause of moral degradation in kids today. This includes just about everything on TV that isn’t treating their priests and bishops with outright adulation, or isn’t airing on EWTN.

You’ve seen the effects of this mindset on Dan Brown’s films, and the MTRCB’s conservative streak.

But you’ve got to ask yourself: Is secular, non-religious media really a poison that addles and corrodes the bonds of community? I’ve decided to take another look at my anti-depression medication, a potent cocktail that’s helped me through some rough spots over the last few months.

Fillies and gentlecolts, my drug of choice: 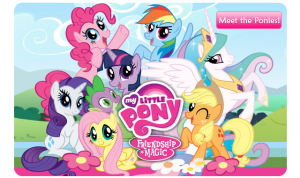 We’re looking at the Generation 4 incarnation of the show, which was created by Lauren Faust. Despite its exceedingly cute appearance and tone, My Little Pony: Friendship is Magic garnered a large following far beyond its target audience thanks to its animation quality, pop culture references (The Big Lebowski, anyone?), song numbers, character depth, and witty humor.

One other aspect of the show that shines is its presentation of the various issues that little girls will face as they grow up, and providing them with creative ways of handling these problems while learning from the experience. It takes some pretty good script writing to teach kids how to deal with the resident Alpha bitch, without becoming one themselves.

We’ll take a closer look at the lessons FiM imparts, as narrated in the friendship report at the end of each episode, and compare them with the traditional “values” the Catholic Church proclaims.

Friendship is Magic: Love and accept people for who they are.

My friends and I have all learned an important lesson this week: Never judge a book by its cover. Someone may look unusual, or funny, or scary. But you have to look past that and learn who they are inside. Real friends don’t care what your “cover” is; It’s the “contents” of a pony that count. And a good friend, like a good book, is something that will last forever.

When you first sent me to Ponyville, I didn’t know anything about friendship. I met somepony tonight who was having the same problem – your sister, Princess Luna! She taught me that one of the best things you can do with friendship is to give it to others, and help them find it themselves! And I’m happy to report that all of Ponyville has learned that even though somepony seems a little intimidating, even scary, when you offer them your friendship, you’ll discover a whole new pony underneath. And even if my Star Swirl bearded costume didn’t go over, this still turned out to be the best Nightmare Night ever!

The Church: You should have been aborted!

Friendship is Magic: Compromise and tolerance.

Friendship is a wondrous and powerful thing. Even the worst of enemies can become friends. You need understanding and compromise. You’ve got to share. You’ve got to care —

The Catholic Church opposes gay marriage and the social acceptance of homosexuality and same-sex relationships, but teaches that homosexual persons deserve respect, justice and pastoral care. The Vatican and Pope John Paul II are speaking out against the growing number of places that recognize same-sex marriages.

Friendship is Magic: Generosity and selflessness.

Today I learned a great lesson about friendship. Well, you might think that it would feel good to get lots and lots of stuff, but it doesn’t feel nearly as good as giving something special to somepony you really care about. But I learned that it truly is better to give than to receive, and that kindness and generosity are what lead to true friendship. And that’s more valuable than anything in the world.

– Secret of my Excess

The Church: Yo Dawg… 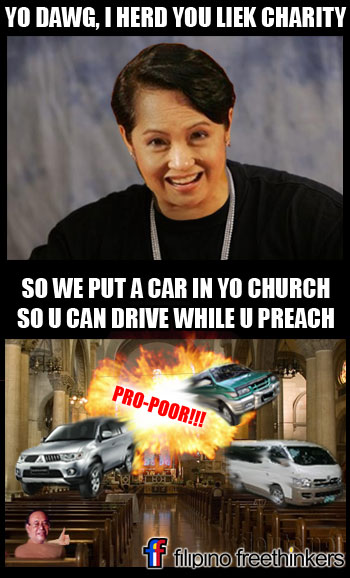 Friendship is Magic: True friends never give up on you.

Today I learned that it’s hard to accept when some pony you like wants to spend time with some pony who is not so nice. Though it’s impossible to control who your friends hang out with, it is possible to control your own behavior. Just continue to be a good friend. In the end, the difference between a false friend and one that is true will surely come to light.

I used to think the most important traits to look for in a pet, or any best friend, were all physical competitive abilities. But now I can see how short-sighted and shallow that was. Today I learned what the most important quality really is. A certain kind of spirit. A stick-to-it-ive-ness. A never give up, can-do attitude that’s the mark of a real winner. And this tortoise has it.

The Church: It’s alright to be buddy-buddy with a serial divorcee (http://elections.nytimes.com/2012/primaries/candidates/newt-gingrich) or an accessory to the enactment of Martial Law, as long as they tow the party line against reproductive health.

Friendship is Magic: Be honest with your friends and loved ones.

This is Spike, writing to you about my adventures. This week, I learned that being jealous, and telling lies gets you nowhere in friendship. I also learned that there’s plenty of love for every friend to share.

The Church: “What child abuse?” 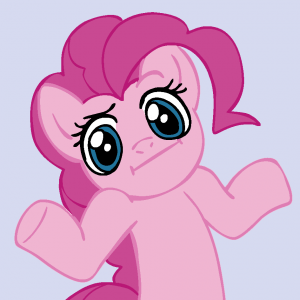 The report found that Bishop John Magee – who stood down in March 2009 after serving as bishop of Cloyne since 1987 – falsely told the government and the health service that his diocese was reporting all abuse allegations to authorities.

It also found that the bishop deliberately misled another inquiry and his own advisers by creating two different accounts of a meeting with a priest suspected of abusing a child, one for the Vatican and the other for diocesan files.

It’s a sad state of affairs when a cartoon does a far better job at teaching our kids about the right set of values, than a 2000-year old institution that regularly claims the moral high ground.

…and failing spectacularly at almost every opportunity.

If there is one thing that Equestrians and the RCC can agree on, it’s that their leadership has its share of sexually deprived, power-tripping weirdos. 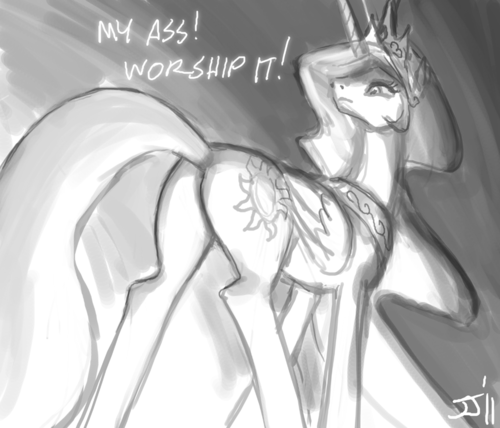 But at least Princess Celestia/Molestia actually does her job, ruling all ponyfolk with (relative) benevolence and wisdom. She just has some unusual tastes.

On a parting note, I recommend Friendship is Magic as good viewing for the non-theists ponyfolk out there looking for wholesome, educational programs for their kids.

Just stay the hell away from the “Cupcakes,” unless you’re into that sort of thing.

Tony Meloto and Faith in the Filipino