Like many feminist psychologists, I wonder why Freud was so fascinated by the tale of Oedipus that it became the predominant metaphor of his theory of psycho-sexual development. To make a Greek tragedy short, Oedipus unknowingly took his mother as wife. Upon learning this, Oedipus suffered from such guilt and remorse, that he blinded himself.

There are less male-centric stories from the Greek classics about sexuality and innocence that Freud could/should have considered. At the very least it would have balanced his theories of sexual development and women would not have had to suffer decades of damaging psychotherapeutic advice.

For example there is the myth of Demeter and Persephone. A myth I prefer for reasons I shall explain shortly. 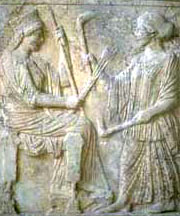 Demeter is the goddess of the earth, agriculture, growing. Her daughter is Persephone. Persephone was kidnapped by the god of the underworld, Hades. It is a classic case of kidnap-rape. Having lost her daughter, Demeter grieves. The earth turns barren and cold.

Soon the other gods must intervene. In the end, despite having eaten of the pomegranate fruit that condemns her to the underworld, Persephone is released by Hades to go home to Demeter for half of each year. Upon her return, Demeter rejoices, sunlight and warmth return, things begin to grow again, the flowers bloom and the world sings. It is a return to joy, where the earth is able to bring forth that which will nourish itself and humankind.

Patriarchal elements aside (personally I would have preferred that Hades be condemned to prison, but he is after all, already in the Underworld), the story has tremendous value as a metaphor for an egalitarian sexuality that would liberate men and women from the pathology of current heterosexist and patriarchal disillusions.

It is the full recognition and valuation of this primordial creativity, rather than its denial, that is the first step towards towards men’s embrace of child-rearing and other forms of nurturing. It is also a necessary element towards understanding the centrality of sexuality to political theory and emancipatory strategy.

To understand this delight in the fruits of our sexual bodies and to embrace it without fear, is to understand the path to joy without guilt. See Demeter and Persephone’s happiness and how the whole world participates in this revelry! It is a joy so marvelously free of the hate that the religious fundamentalists bring to any earthly and embodied pleasure. And here I would agree with Freud. Unless this misogynistic self-loathing is brought to light, we shall never get to the bottom of predatory sexuality. Here I agree with those social psychologists who say that the impulse to fascism (religious or political) is rooted in psychic structures of control and repression that begins with how we construct the sexual self.

The myth of Demeter and Persephone validates what decent men and women feel about their children, even the girl children that many societies try to convince us are less valuable. There is no heterosexual reconstruction of maternal love for the male child in this story—something Freud would do repeatedly in his Oedipus-based readings of female sexuality; something repeatedly underscored by patriarchal readings of the story of Mary and Jesus. There is no degradation of the daughter who has lost her virginity to the unwanted male.

To the rape victims in my clinic, I try to be Demeter. There can be no stigmatization that is attached to their ordeal. I require nothing more of them but to return to the light and to eventually learn again to dance and sing. There is no shame in having survived, no question as to whether they had anything to do with the rape and kidnap. No degradation that accrues to the victim. Only gratefulness that they have survived and the promise of a return to self-nurture and growth.

Some of my counselees are women coming home from overseas. They bring with them tales of abuse and loneliness. But they also tell me that they have eaten the pomegranate seed—the good salaries they appreciated; the child of their employer they had nurtured and learned to love; the intimacies of friendship and romance they found there; the release from the parochial values of small towns; the sophistication that comes from having encountered a different horizon.

Demeter and Persephone are a metaphor for the homecoming of Filipinos to Inang Bayan. It is especially appropriate for those who, for whatever reason, left the country unwillingly or at great cost. We must welcome them all, particularly the trafficked, the raped, the kidnapped, the abused. We must continue to work for a society that will allow them to stay home for good. Meanwhile, when they return, the earth must sing and dance and welcome them back, with joy.