Of the many things that terrified me when I was younger — ghosts,  garden gnomes, my father, that dead-Jesus-in-a-coffin statue at church — nothing made my skin crawl more than the thought of my wedding day. According to my relatives, taking some dude to be my lawfully wedded husband was as inevitable as getting stuck in traffic. No matter how consistent and insistent I was that I was never ever getting married ever, they’d just dismiss me as too young and angsty to know what I was talking about.

It’s true that my old reasons don’t hold much water nowadays, especially since the usual wedding traditions are no longer mandatory. I used to fear itchy, froufy white gowns with pearls and sequins; thick, smelly makeup; making little girls wear miniature froufy white gowns and thick, smelly makeup; having hoardes of kin fuss over you; spending over an hour in some creepy church (I was a wee, budding atheist then); letting your father walk you down the aisle all emotional-like; throwing a flower bouquet to a group of desperate, squealing women; the tears and syrupy well-wishing of said group of women; watching some dude put an absolutely unnecessary article of clothing called a garter on some tittering woman’s thighs; force-feeding cake; etc. Today, anyone can do away with these little nuptial chestnuts and it wouldn’t be a big deal. It could be a civil wedding with only one friend present and it would be fine.

But I am now 25 years old with a boyfriend of 2.5 years (which is, in my experience, a FUCKING MIRACLE), and the thought of marriage, however stripped down, still makes me queasy.

It’s not because I’m afraid of commitment; I want to nurture the relationship that I have for as long as humanly possible. In fact, we’ve been living together for more than a year, and pass as much gas in front of each other as married people do. What doesn’t sit very well with me, however, is the paperwork.

I don’t really care about the legal benefits shared between spouses, which are, at the end of the day, the only real “advantage” of getting married (after all, it doesn’t take a ceremony and a signature to prove your love to anyone). My boyfriend and I are averse to credit cards, so the ability to use your spouse’s card means squat to me. Neither do the supposed tax benefits, since I insist on keeping our income and expenses separate. And as for schools prohibiting our (maybe) future kid from applying because his folks aren’t married, I wouldn’t want any child of mine to study in an institution with a rod up its ass in the first place.

And about the exit plan. The last two things I would want to face upon the end of a relationship are payments and paperwork. Thus, this isn’t even a matter of the Philippines prohibiting divorce. It is heartwrenching enough to part from someone you care/used to care very deeply about. Having to make certain legal arrangements of whatever sort due to separation sounds like a lot of unnecessary tedium and pain. And money.

In line with this, I wouldn’t want one’s apprehension towards this said tedium and pain and money to be the reason for two people to force themselves to stay together, either. I bet if my mom and dad — who are, objectively speaking, a doormat and an asshole, respectively– just had the luxury of splitting up without having to legally prove why they should, then I would have had a much happier childhood. I don’t believe in that Hollywood cliche where the kid is totally broken that his folks are splitting up. I was broken because my folks stuck it out. They thought that splitting up would be the easy, immature way out. I truly believe that the opposite is true. 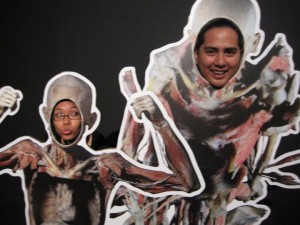 I know that my boyfriend and I are two perfectly intelligent, competent (and, like, totally hawt) individuals, and that we will only keep being together for the right reasons. I feel incredibly lucky that I get to see him everyday, have all sorts of adventures with him from week to week (especially in line with the Freethinkers’ shenanigans), and have absolutely no shame when I fart in his presence. Why mess with a good thing?