Moving On from Martial Law

On May 10, 2016, I read news that the young Sandro Marcos was the newest heathrob. I was overcome with anger and I lost my temper, so I posted this on my timeline, to be read by my 400+ friends: 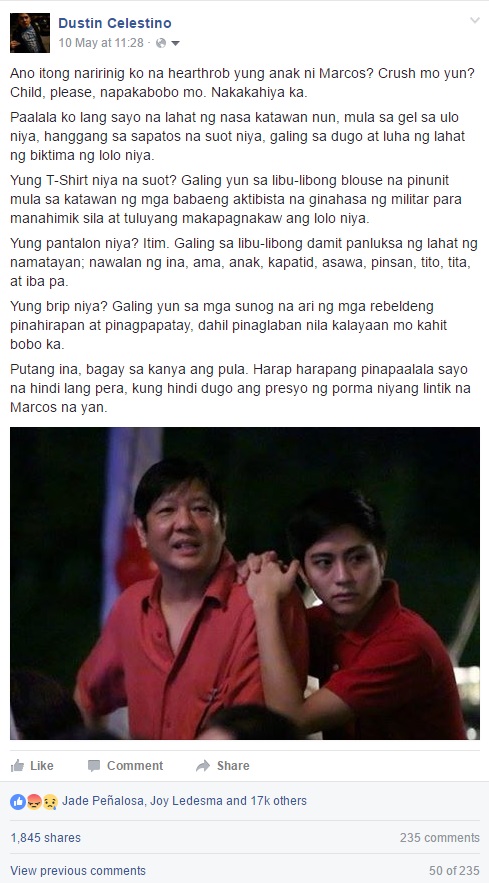 I was frustrated that Sandro’s charm seems to overshadow the fact that Martial Law claimed many lives. The fact that a Marcos can be considered a matinee idol, to me, meant that the stigma of the Marcos name no longer existed. To me, this meant that we have, as a nation, conveniently forgotten the atrocities our parents and grandparents endured during that time.

I felt the need to remind people that the privilege that Sandro enjoyed was bought with the lives of thousands of Filipinos; and that the popularity the Marcoses enjoyed was a testament to our failure to spread the truth about Martial Law, and our inability to compel a younger generation to remember the victims who, until now, have not been given justice, or even a proper apology.

I thought I was going to compel millennial kids a lesson. Instead, I learned one myself.

My antagonistic approach has not only failed in a very epic manner, but has won me the ire of more than 10,000 strangers.

Around half of them called me an idiot (fair enough, I called them idiots first). A quarter of told me, “Shattap na lang.” A few of them asked me to kill myself. One challenged me to a fist-fight and invited me to have oral sex (I’m not sure if he meant that this should happen before or after the fist fight):

Instead of reminding them that the Marcoses political status is afforded by atrocities committed in the past, I instead united these apologists, and created an echo chamber, a venue where apologists can reinforce their beliefs about how Martial Law was the “Golden Age” of our nation.

For this, I apologize to all the advocates and victims that I thought I was helping.

“It’s easy to dismiss the Marcos loyalists and Ferdinand Jr. supporters as stupid or paid hacks. However, even some people we admire like Miriam and Duterte have, at various points, defended Ferdinand Jr. or his father. This has given me pause. We need to accept that not all their supporters are “crazy” or trolls. Also that we must persuade them non-violently.

From my experience in nonprofit advocacy work and as a debate coach, I’ve realized that outrage and shaming cannot be our main strategy of persuasion. It’s a tool in the toolbox, but we need other tools. When people feel attacked, they are less likely to agree with us or reconsider their position. Winning a Facebook argument is easy, changing someone’s mind isn’t.

Also, when we belittle other ideas, we create echo chambers. We have animated and admittedly funny discussions within our circles. But we don’t realize that there are other communities that we haven’t engaged and it catches up with us in the form of almost 14 million votes for Ferdinand Jr. We also miss the opportunity to persuade those who are on the fence or lack information, who may be considering Ferdinand Jr. in good faith.”

The truth is I should have been more careful, and less reckless with how I expressed my ideas. I am, after all, on social media. I was honestly shocked that a statement on my personal timeline could reach thousands of people, since I don’t even have a thousand contacts. However, as I have learned the hard way, hateful communication is much louder, spreads faster, but accomplishes just as much as a silent fart: stinky air that causes frowns.

In any case, there were important points of discussion raised on the toxic thread I started:

1. “Martial Law may have been bad but the younger Marcoses had nothing to do with it. Bakit si Sandro? Bitter ka ba kuya?”

And it’s true that Sandro wasn’t even born yet at the height of Martial Law. He didn’t ask people to be tortured. However, in my opinion, “hearthrob status” for one who holds the Marcos name is only possible when the stigma has disappeared from our cultural consciousness. To me, this is a clear indication that the people we are counting on, the youth, to continuously remind our nation of Martial Law, have become enamored of the family they’re supposed to be holding accountable.

It was, to me, a slap on the face of Martial Law victims. As petty as it sounds, I believe that any positive status relating to the Marcoses should only be acceptable after the Marcos family has acknowledged that terrible things happened in the past, under the rule of their departed patriarch.

I criticized, in poor fashion, his admirers and their emerging “crush” culture that reinforced and enabled this convenient forgetfulness.

As for Sandro himself, I criticized his privilege. I implied that everything he owned was bought with blood.

But, you’re right, it’s not his fault that he was born a Marcos. If I had approached this issue with more empathy, I would have realized sooner that despite the privilege he enjoys, and regardless of how popular he is now, it will never be easy for him because he is a Marcos, and because he will carry a name that is associated with a variety of offenses he probably wasn’t involved in.

No, I don’t think we should move on.

I believe Madame Leni Robredo said it best in this article (http://newsinfo.inquirer.net/767648/leni-to-bongbong-moving-on-from-martial-law-nightmare-not-easy):

“To be a Miss Universe is both an honor and a responsibility. I want to remind the world, the universe rather, of these three hashtags; ‪#‎NoToBBM, ‪#‎NeverForget, and ‪#‎NeverAgain. Let the Marcoses apologize for human rights violations during that martial law thingy and let them return all the ill-gotten wealth, only then can we truly move on. Now look at that thingy on my head. It makes you think “This person is confidently beautiful, with a hat.”

Sorry, guys. Gwapo ako. Although one could argue that beauty standards are subjective there are ways to measure a person’s physical attractiveness objectively, such as: facial equilibrium, proportion, fitness, and hygiene. And right now, I qualify according to these standards. At some point, I will not be as gwapo, because I will age and wrinkles will develop. But, right now, I am, at the very least, above average in terms of physical attractiveness.

If you don’t agree, don’t worry. I’m sure you’ll be able to “move on” from what I said. “Past is past,” after all. Martial law nga nakalimutan niyo eh, yung statement ko pa kaya 😉