Rebooting any beloved piece of popular culture always courts cynicism and dread. (Not to say that previous experiences have been successful at silencing the pessimists.) In popular science, there are very few touchstones as revered as Carl Sagan’s Cosmos: A Personal Voyage. So, its revival under the helm of Family Guy’s Seth MacFarlane raised not a few eyebrows—regardless of his creative caliber.

Sagan’s A Personal Voyage delivered to the general public the story of the universe in a manner that captured its romance without sacrificing the integrity of science. Carl Sagan, after all, was the most famous science communicator at the time. His impact on the world still ripples to this day.

Over thirty years have passed since the original Cosmos. As a product of the 80’s, it carries the tropes of its time—the grainy chroma keying, the sharp synths, and the cheesy 3D graphics. Viewing it today, these hallmarks seem to only emphasize the depth of Sagan’s message and that it retains its value even through eyes spoiled by modern special effects. Set against the backdrop of the Cold War, A Personal Voyage was more than a cavalcade of science factoids. It cemented in popular consciousness the importance of science in culture and philosophy. 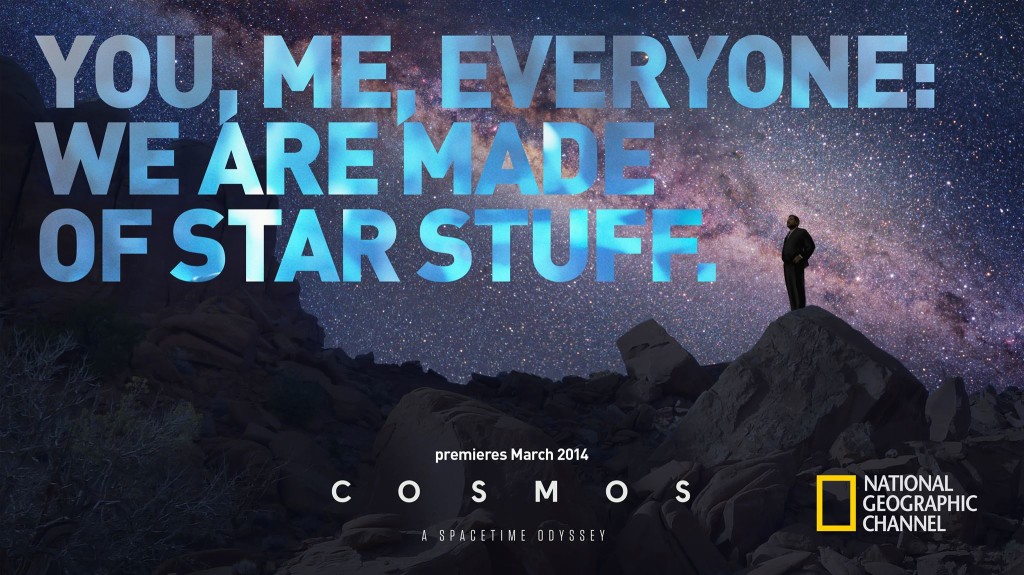 Neil deGrasse Tyson hosts this generation’s Cosmos—subtitled, A Spacetime Odyssey. After Sagan’s death, Tyson has become the perennial science communicator and his taking over for Carl is not only appropriate, but almost necessary for the new show.

Sagan’s co-writers, Ann Druyan and Steven Soter, reprise their roles. In the first episode, A Spacetime Odyssey revisits, but not retreads, much of the original. They retain key metaphors that have stood the test of time, such as the Cosmic Calendar, which reframes the universe’s 13.8 billion year history into twelve months of an Earth year. And yet, they pay homage to rather than dwell on the writing of A Personal Voyage. Druyan and Soter could have rested on the now-classic turns of phrase they used decades ago, but their poetry here is as impactful and refreshing as ever.

What will be missed, however, are A Personal Voyage’s live acted dramatization of historical events. A Spacetime Odyssey instead uses cartoons. The animation is not as fluid or appealing as I would have liked, but the matter they presented more than made up for any lack in its technical prowess.

The first episode relates the story of a man not as popular among the heroes of science, Giordano Bruno. He is portrayed as a man who refused to follow tradition and faith when evidence clearly pointed away from them. In his studies of Copernicus and Lucretius, he was convinced that not only was the Earth not at the center of the universe, our Sun was just another star in an ocean of other suns, surrounded by their own earths. For this, he was burned alive.

The show presents all these without apology and without sentimentality. This is how the world treated people who thought differently and were not shackled by dogma. In showing Giordano Bruno’s story, A Spacetime Odyssey dares to go further and more bluntly than the original in challenging conventional unscientific thinking. As anti-science movements get more and more virulent with the power of modern media and indoctrination, shows like these provide a vital prophylactic.

Much of the science that reaches the masses has been neutered by the subtle bigotry of the expectation of propriety from the religious majority—the unspoken rule that science shouldn’t ruffle feathers lest it turn away more people. But science works by questioning everything and refusing to be satisfied by what others merely insist upon without evidence—values that A Spacetime Odyssey repeats throughout the first episode.

It cannot be stressed enough how important it is that MacFarlane brought this show to America through Fox, a big network television channel accessible to anyone there. Here in the Philippines, it is carried by National Geographic, on cable TV. One can only hope that one of our own over-the-air networks will carry it someday as RPN-9 did for the original.

Standing Up in the Milky Way, the first episode of the new series ends on a fitting tribute to Carl Sagan but, avoiding the risk of becoming indulgent and saccharine, does not linger on it. Instead, it uses the tribute to invite the viewer to continue on the voyage that Carl introduced to millions a generation ago. Science improves and develops over time, giving us more things to love about the things we thought we knew. And that’s exactly what Cosmos: A Spacetime Odyssey has done in its debut.