Secular Morality and the Is-Ought Problem

The topic of morality has always fascinated the freethinker in me that I’ve been reading, writing, and debating about it for years. But what fascinates me most is the realization that just when I thought I had it all figured out, there remains a gap that just can’t be bridged.

My position had been that we can be good without God, and that science and reason are all we need to chart morality.

Today I no longer hold that position.

Richard Dawkins as well as other scientists have shown how evolutionary biology can explain altruistic behavior, why we help others when there is no obvious benefit to ourselves or even when it would actually harm us, but they fail to explain why altruism is “good” to begin with.

This is the argument of the philosophical theists, which happens to be more challenging to rebut than those of the fundamentalists who say that the Ten Commandments or the Bible (or the equivalent holy book of their religion) is the true moral code. Not unexpectedly, whenever an atheist blogger criticizes religious morality and asserts that secular morality is better, philosophical theists would accuse him of attacking a strawman and go on to say that he utterly has no idea what he is talking about.

Any attempt at establishing a moral code not derived from religion inevitably runs into the is-ought problem, an unbridgeable gap between what is and what ought to be. For example, there is nothing in the statement “people are suffering” that allows for the conclusion that we ought to find ways to alleviate their suffering – even though it feels like the most natural, instinctive, intuitive, and “moral” thing to do. That may sound absurdly callous and inhuman, but there is also nothing in the statement “that is absurdly callous and inhuman” that establishes why we ought not to be callous and inhuman at all.

Philosophically speaking, there can only be an “ought” when such ought is inherent; oughts are not emergent, that is, they cannot be derived from an “is.” And, philosophical theists would contend, the only way to have a moral ought is to have it built into us by a creator: if God created us and laid down certain rules, we ought to follow those rules not because of the fear of eternal punishment or even out of gratitude for the gift of life, but because that’s what we were created to do.

While the term ought is currently used to indicate duty or obligation, its etymology traces back to “owe” and “own.” In other words, one could say that we ought to obey God (assuming he exists) out of moral duty because we owe him our lives and he owns us.

The philosophical theist, however, addresses the Euthyphro dilemma by postulating that God is the good, or God = good, so he cannot therefore command anything that is not morally good, and at the same time he is not subject to a higher standard of morality because God is moral goodness itself.

The only problem with this argument is that the contention that “God is the good” is a bare assertion, a matter of arbitrary definition and not a universally accepted fact or a logical conclusion derived from verified premises. 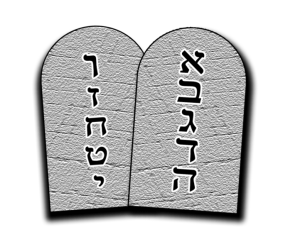 One can imagine that a perfectly objective and binding moral code is something written by a perfectly moral creator and directly handed down to all humanity, that is, not through prophets or some self-proclaimed divine messenger.

This is where both religion and philosophical theism fall short. Religions cannot agree among themselves what God’s laws are or even who or what God is; philosophical theists, on the other hand, merely assert that there is a moral law not found in any holy book but somehow written in our hearts, but they fail to establish that it is our God-given conscience talking and not our own selfish manipulative wills considering that there seems to be no consensus among the hearts of men and women.

Philosophical theists like to boast that their morality is superior to secular ethics because it has an ontological base (i.e., God), meaning they have an objective basis for conceptualizing such moral system. They do have a point, but unfortunately such ontological base is simply assumed. Take away that assumption or challenge it by demanding proof and the base crumbles, leaving their morality hanging by the thread of a bare assertion.

And while secular ethics also makes an assumption that well-being is good without explaining why it is good, it appeals to the moral nihilist which I seem to have become. With all this talk of the is-ought gap, I no longer use the term “moral” without qualifying it. Instead, I prefer to use the term “civilized.”

While civilized is a relative term particularly when used to refer to society (e.g., societies of decades past considered themselves civilized but some of their practices like discrimination are barbaric by today’s standards, just as future generations will surely have something to condemn about today’s norms), I like how civilized societies continuously expand their circle of awareness, granting rights to more and more displaced groups and individuals (and even animals), taking care of their well-being.

I may not be able to explain why we “ought” to be civilized, but it feels good to me as it apparently does to a lot of people – civilized people, that is, people who do not require an ontological base or demand to bridge the is-ought gap before deciding that it is the moral thing to do.

Eventually, the secularist will have to admit that his morality is not objective insofar as his moral values are not founded on something that transcends humanity. But this is not to say that his concept of right and wrong is determined by nothing more than the norms of society notwithstanding how civilized or compassionate a particular society has become.

Whether society matures or degenerates into a dog-eat-dog world where “might makes right,” secularism offers the following principle laid down by George Jacob Holyoake, who coined the term secularism: “Individual good attained by methods conducive to the good of others, is the highest aim of man, whether regard be had to human welfare in this life or personal fitness for another.”

Such principle may not have an objective foundation in the sense that it is nothing more than one person’s assertion regardless of how many others may have intuitively come up with it on their own or how practical it may sound (e.g., personal welfare achieved to the detriment of others is often short-lived), but once internalized, it is a straightforward ethical code to objectively judge and guide people’s actions in an ever changing society. Opponents of secularism may easily point out that we have not established what “good” is, but it would take a lot of semantic acrobatics for them to argue that we cannot objectively define what welfare is.

Once we decide that we’ve had enough philosophizing over the is-ought problem in relation to the moral value of what we take for granted as good, we can focus on how to pursue our welfare by means conducive to the welfare of others. If you consider such pursuit good without obsessing on why we ought to pursue it, it can be said that you’re a compassionate, practical, and civilized person. But if you can’t subscribe to secular ethics because it lacks an ontological base – because there is nothing in the statement “people are suffering” that allows for the conclusion that we ought to find ways to alleviate their suffering – then congratulations! You are a philosopher.