26 August 2011, Manila, Philippines: Philippine freethought organization Filipino Freethinkers won in “The One” category at the local [email protected] Awards, the first social media-themed tilt of its kind in the country. “The One” is considered “the most influential trendsetter that shaped opinion, moved people, and prompted action,” through the use of social media tools such as websites, Twitter, and Facebook, and is seen as the top spot amongst the 10 available categories. The group was honored with a trophy and a PHP100,000 (USD2,351) cash prize.

The Freethinkers were also finalists in “The Advocate” category, and in the voting polls that comprised 10% of the total score, the group received the most votes in both spots. 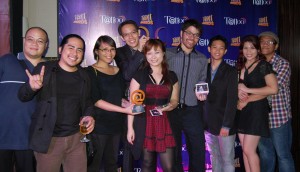 “We are thrilled to receive this award, as the group would not have gotten to where it is now without the help of social media,” says Red Tani, President of the Filipino Freethinkers. ‎”However, we want to remind people that actions and conversations should not end in the realm of social media. Intelligent ideas are worthless if they’re not implemented in the real world. Online and on the ground advocacy and activism should go hand in hand.

‎”We’re also happy that we won the major prize considering the circumstances. Not only do we promote the Reproductive Health bill, we’ve been criticizing the Catholic church hierarchy without reservation. We were afraid that controversial issues such as these would keep us from winning. Maybe this recognition from Globe is a sign that the Philippines not only tolerates but welcomes our progressive ideas.”

Other awardees of note were National Chair of the Democratic Socialist Women of the Philippines Elizabeth Angsioco, and Broadway star Lea Salonga, who won in “The Advocate” and “Ballbreaker” categories, respectively. Both women are the Freethinkers’ allies in the fight for the passage of a comprehensive reproductive health bill in the Philippines.

With 29,270,000 Filipinos online spending 41.3% of their time on social media, the Philippines is often dubbed as the “Social Networking Capital of the World.”

Vote for the Filipino Freethinkers at the ISIF Asia Awards!

Open Letter to the Department of Education