The world of quantum mechanics is strange, that much is true. Quantum theory paints a world where tiny particles can get entangled over cosmic distances, where teleportation is possible, where uncertainty is not simply a product of experimental imperfections but is fundamental in nature, and where vacuum is a seething broth of virtual particles popping in and out of existence from nothingness.

Unfortunately, the strangeness of the quantum world has been grossly abused either by those who do not understand quantum mechanics, or those who wish to benefit from this lack of understanding. Merchants who sell crystals claimed to have “healing quantum vibrations”, writers like Deepak Chopra who preach about the mind’s power in influencing events via “quantum consciousness”, and proponents of farming methods based on “quantum agriculture” are just a few examples in the long list of people who peddle quantum quackery. In fact, most of these charlatans altogether forgo trying to understand what quantum theory is about. For them, the word ‘quantum’ is a shroud of mystery, a veil of ignorance behind which lie phenomena forever beyond the reach of scientific scrutiny. These people not only spread bad science, they spread a value that is antithetical to learning. In other words, they promote a mindset that is anti-scientific. This is why we cannot cut these guys any slack. 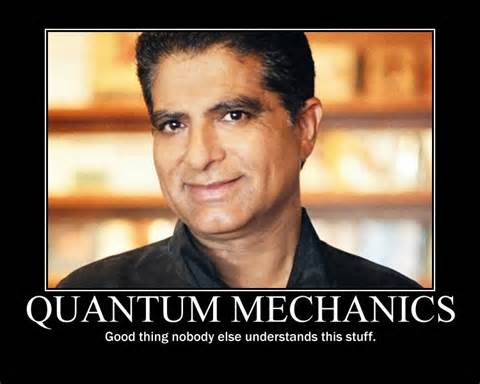 How do we distinguish quantum quackery from genuine studies in quantum theory? In an interview with NBC News science editor Alan Boyle, physicist Lawrence Krauss gave a few tips in detecting quantum quackery. What follows are some additional quick guides to quantum baloney detection.

Rule of thumb #1: Quantum quacks rarely, if at all, refer to the basic principles of quantum physics.

Quantum theory involves a lot of laws, equations, and principles, although some of these are so basic and fundamental to the field that they are referred to in almost all discussions. A good example would be the concept of the wave function. The wave function is a mathematical entity that contains everything we know about the particle, like its energy or the probability of finding it somewhere in space. When something uses the word “quantum” but does not depend on the concept of a wave function or a similarly fundamental quantum concept, it probably has nothing to do with quantum theory. 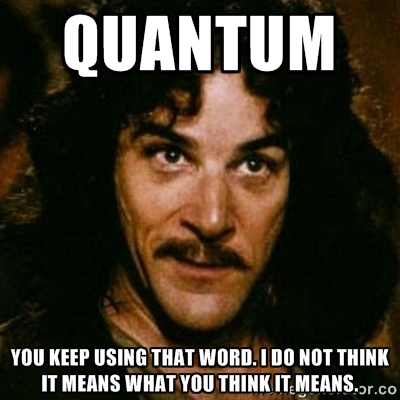 Rule of thumb #2: Quantum quacks misapply the weirdness of quantum phenomena at the wrong scale.

Soccer balls, unlike electrons, don’t diffract if you make them pass through slits. And unlike a small particle, you cannot walk through a solid wall by continuously bumping against it. There is no real-world Platform 9 ¾.

Quantum mechanics, being our best theory of matter and forces to date, governs the behaviors of electrons and soccer balls alike. However, even though the laws of physics don’t change across different scales, their manifestations do. This is true even in classical physics, and is the reason why you can’t have ants as big as elephants, or why the physics of Honey, I Shrunk the Kids is all wrong (because, you know,  square-cube law). The predictions of quantum theory agree with classical mechanics in the scale of the everyday, a scale that includes soccer balls, fruits, and vegetables. You cannot treat a tomato as both particle and wave, and you cannot treat crops as if they are “entangled” with the the stars.

Science, as opposed to pseudoscience, is distinguished by the precision of its language. We want scientific statements to be precise because we want to know how we can prove them wrong. In other words, we want to know if they can be falsified, and how, which brings us to the next rule of thumb.

Rule of thumb #4: Quantum quackery does not make falsifiable claims, which is an indication that it is in fact pseudoscience.

Quantum mechanics, like most of modern physics, is heavily mathematical. The point of all this math is to be able to make predictions that come in the form of measurable quantities. This is important because a quantitative prediction is the best form of falsifiable claim.

Rule of thumb #6: Like most peddlers of woo-woo, quantum quacks confuse criticism with persecution, and thus hate being criticized.

But science thrives because of skepticism and criticism. Like all scientific paradigms, quantum theory has passed the scrutiny and very high standards of the scientific community (and it has done so with flying colors). Also, like all scientific principles, you can convince yourself that it is true by performing your own experiments and calculations. And you can do this without fooling yourself or others. You cannot say the same about fields like, say, quantum agriculture.

tl;dr: People who use quantum jargon to make their woo-woo sound legitimate fail to understand that the quantum world, though weird by the standards of classical physics, is lawful. Quantum phenomena may be baffling, but they’re not magical. So when anything involves magical thinking, it’s probably pseudoscience.

Can Salt Power Anything? | FF Podcast