Anti-RH assaults RH advocate inside the House of Representatives

(May 24, 2011) Quezon City, Philippines — A pro-RH advocate was recording RH Bill interpellations inside the House of Representatives (HOR) when an anti-RH advocate made threats of violence and ultimately resorted to it.

Kenneth Keng, the RH advocacy director of Filipino Freethinkers, was threatened and then assaulted by Rizalito David, former senatorial candidate of the Ang Kapatiran Party and resource person of Pro Life Philippines.

It started with a brief exchange about how the RH Bill was part of America’s imperialist plot. David spoke loudly so that Keng would hear his accusation: those who didn’t agree that the Kissinger Population Report was imperialist was “bobo” (stupid). Keng replied that he has read the report and that he didn’t think it was stupid. David replied, “Like I said, bobo.” Keng ignored the comment and continued to record the hearing.

Later, while Rep. Garcia was discussing the allegedly imperialist funding of RH advocates, David told Keng about the questionable nature of the funding that RH advocacy groups received from foreigners. Keng replied that the Catholic Church and the anti-RH side also received foreign funding and that this was also questionable.

At this statement David started to get angry. He invited Ken to go outside with him (doon tayo sa labas) where he would make it absolutely clear how questionable the RH funding was when it was only the two of them (pag tayong dalawa na lang). The threatening tone and adversarial choice of words carried with it an implicit threat of violence. Keng pointed his cameraphone from the hearing to David to protect himself and gather evidence for these threats.

At this, David became furious. He stood up from where he sat 3 or 4 seats away, shouted some unintelligible words, and walked towards Keng with his arms slightly raised, as if prepared to throw fists. The people behind him managed to restrain him, so he pretended to have calmed down and sat beside Keng. Seated and unrestrained, David hit Keng’s cameraphone, which was next to Keng’s face, with the back of his hand, sending the cameraphone flying into Keng’s glasses.

David then stood up and walked out of the hall. Witnesses from the row behind picked up Keng’s phone and gave it to him.

Red Tani, president of the Filipino Freethinkers, rose from the seat next to Keng’s and followed David outside. He caught up introduced himself, and asked David who he was and which organization he worked with, also requesting that they discuss what had happened. David refused to identify himself. He accused Tani of committing an action against one of his (David’s) colleagues. Tani told David that this was the first time he’d even met David, and that he had no idea what action, colleague, or organization David was talking about. Keng arrived and asked David the same questions. David refused to reply with any information on his or his organization’s identity.

Keng and Tani followed David outside the hall and met other RH advocates in the lobby, where they discussed potential actions, such as filing a case against David in the precinct nearby, and submitting an incident report to Congress. They were about to approach David but he had started walking upstairs to where the other anti-RH advocates were.

Keng and Tani, accompanied by witnesses and other RH advocates, waited until the end of the session for David to return so that they could figure out who he was and discuss what had happened. At the end of the hearing, David finally emerged. He was escorted by Father Melvin Castro of the CBCP, discreetly walking near the edge of the lobby toward the exit.

Keng and Tani approached David and Castro to ask them about David’s then unknown identity (at this point the RH advocates didn’t know who David was). David and Castro ignored the pair and walked straight to the driveway outside. Keng continued to ask the question until it became obvious that David and Castro were determined to ignore him.

Later at the lobby, a fellow RH advocate identified the assailant as Rizalito David.

Filipino Freethinkers condemns the actions of Rizalito David: for indirectly calling Keng “bobo” (stupid), for threatening or at least provoking Keng with violence (doon tayo sa labas), and for hitting Keng’s cameraphone into his face. That this all happened inside the chamber of Congress while a legislative process was going on makes his actions even more unacceptable, especially considering the fact that David once aspired to become a legislator. 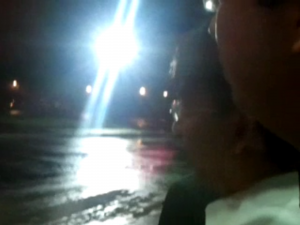 We also condemn how Rizalito David — and to a lesser extent, Melvin Castro — hid his identity from us after several polite attempts at civil dialogue. Hiding himself and even his identity after doing what he did only shows that he himself is ashamed of what he did, and knew that he was at fault.

In the next few days, we hope to get David sanctioned by Congress and banned from entering its premises. We will file an incident report in Congress tomorrow, and we’ll consider filing a lawsuit against Rizalito David — we have more than enough witnesses who are willing to testify.

The Filipino Freethinkers is a group of nonbelievers and progressive believers who practice and promote reason, science, and secularism. They have members around the world, with regional chapters in Davao and Cebu, university chapters in UP Diliman and UP Manila, and affiliate organizations in Asia and the US. For more information, visit https://filipinofreethinkers.org/about-ff/ .

If you’d like more information about this, or to schedule an interview with Kenneth Keng, please call 0917-9681387 or email him at [email protected]

Vote for the Filipino Freethinkers at the ISIF Asia Awards!

Open Letter to the Department of Education