Our next freethinker is Dustin Celestino. He’s the current content editor of the Filipino Freethinkers website. He is a gradute of Philosophy and teaches writing, literature and research at Asia Pacific College. He was once hailed as the “Number One Authority on Anti-RH Arguments,” by mistake. He’s written over 40 articles for the Filipino Freethinkers and you can find them all here (https://filipinofreethinkers.org/author/dustin_celestino/). 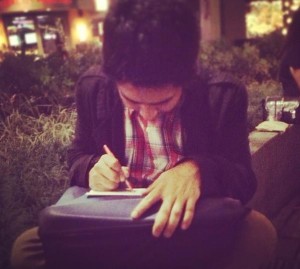 A freethinker is a skeptic, first and foremost. He is a person whose knowledge about the world is based on the most reliable evidence he could find. He tries his best to be objective, and is suspicious of tradition, authority, and hearsay. He’s the type of person who would spend hours researching, looking for evidence, and would spend even more hours looking for counter-evidence, before he reluctantly makes a “truth” claim. In addition to that, I think a freethinker is a perspectivist who is aware that contradicting “truths” are constantly competing for validation and verification, and that there are agendas that influence the promotion of these “truths.”

He is someone who can understand, and even acknowledge, the merits of beliefs and ideas that contradict his own. I think a freethinker is also a person who is “free” from his own ego; a person that would be happy to be corrected, if the correction made by a rival would bring him closer to the truth that he is seeking.

I am an atheist. I live my life with the assumption that there is no God. I acknowledge the cultural reality of the idea of god, but reject its literal reality. I mean, God is real in the same way that abstract ideas like honor and beauty are real. These ideas do not have a physical reality, but they do have influence over the behavior, beliefs and emotions of people. However, these ideas do not have an objective, concrete, or measurable reality, in the same way that objects in the real world do. Until I encounter non-anecdotal evidence that proves otherwise, I will maintain disbelief in the existence of God.

I don’t usually tell people that I’m a freethinker. I sometimes introduce myself as a member of the Filipino Freethinkers, but I’m often apprehensive about calling myself a freethinker, mostly because I am not entirely sure if I’m behaving or thinking rationally enough to be considered one. I have a tendency to romanticize my existence. I behave irrationally at times. I have a quick temper. I take unnecessary risks. I make bad decisions.

I can provide a litany of resources about why a person shouldn’t drink beer, or why it’s unethical to eat meat, or why a person my age should save more money; I often know what is, scientifically, the right thing to do, but I still end up not doing it.

Sometimes I would rather win an argument than find out what the truth is, when I’m arguing with a person I’m annoyed with. I’m not sure if I’m quite freethinker-like. I’m honestly more comfortable with the term “atheist.” However, I still base my knowledge about the world on evidence, and evaluate information free from the influence of tradition and dogma. So, I guess, that makes me a freethinker, sort-of.

I guess the most interesting response I got after mentioning I was a freethinker was: “Don’t you have to be, like, smart to be a freethinker?”

Well, the community taught me to be humble. I was kind-of a smart ass and a know-it-all before and I didn’t take criticism well. My interactions with freethinkers allowed me to learn humility in that I sometimes found myself staring at lengthy essays about why whatever I said was wrong. The Filipino Freethinkers website also provided me a venue where I could write my ideas, and people could swear and curse at me, sometimes by the thousands. But, honestly, what I’m thankful for most is the friendship and camaraderie.

Although there are a few freethinkers who are quite arrogant and hypercritical, I still think that, for the most part, the freethinking community is populated by tolerant & ethical people who are united by their collective passion for humanism.

5) As the content editor of FF, what is your biggest challenge?

I was hoping that through the works of contributors with faith, people who continue to deny science would be inspired to integrate science with their faith as well. I believe that the negative consequences of religion that are often criticized by many of our contributors can be avoided by offering more perspectives on faith.

I’m looking for contributors who believe in both science and God. So, if you know anyone, or if you’re one yourself, let us know.