Our next freethinker is Marcelle Fabie. Marcelle is the head writer for the 8List, part of the Rowdy Empire on WAVE 89.1, a host, magician, mentalist, and comedian. 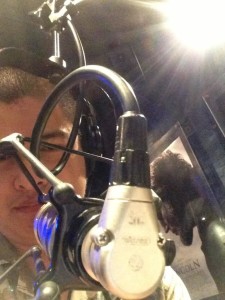 A freethinker is someone who questions before accepting: someone who is guided by reason rather than dogma when it comes to believing or not believing in something.

That’s hard to answer, in all honesty. There are days I wake up feeling I’m an atheist, or days I feel like I’m a hardline Catholic. Other days, I feel like a deist. Even calling myself “agnostic” in the face of that realization doesn’t seem to make sense to me.

I guess what I’m trying to say, is I’m pretty bad with labels.

“Huh. But why are you celibate and straight-edge?” Because obviously, being a freethinker means being a hedonist, right?

It has opened my mind to other points of view that wildly differ from mine, especially when it comes to ethics. For example, if I never heard Red Tani describe his reasons for being pescetarian, I would still probably roll my eyes at the very concept of veganism to this very day.

5) How did you become a magician/mentalist? Did it influence you as a freethinker somehow?

I was Grade 3 when I gained an interest in magic beyond single tricks, and ironically, it was a nun, Sister Angie, who taught me most of my first routines. It was an on and off hobby for most of my life, until 2006, when in an effort to perform a killer show for a surprise party for one of my then best friends, I seriously took up magic.

At some point, I noticed I was pouring in thousands of bucks into the endeavour already, so I just started announcing at large that I can be hired for magic shows. While learning the ropes that way, I developed an affinity for mentalism, and even took up a few psychology units just to get the right feel for the act.

So no, I don’t have powers, much less have I sold my soul to the devil to do what I do. If I had the smallest notion that doing so would be possible, though, I’d have done it to really make sure my standup comedy act or radio career really takes off from this point on.

As for freethinking, in studying secrets of magic and the way mentalism achieves its results, I’ve become wary of people who claim they have powers, yet are using the exact same methods I use. Hence, the Mindmaster article I wrote for you guys.

I come from the Penn and Teller school of thought when it comes to magic and mentalism. Both being freethinkers as well, they influenced not only my style but even my mentality as a performer. Of course, the traditional magicians frown upon exposure of magic wholesale, but my opinion of exposure is a bit more nuanced by that, having been tempered by Penn and Teller.

Aside from the lists I wrote poking fun at Youtube music videos, I’ll have to go with 8 Mind-Blowing Instances of Pinoy Outrage (Aside from Dan Brown).

I think it’s no secret that my writing style for the 8List has been heavily influenced by Cracked. That being said, this list would have almost fit right in with Cracked, and I’m pretty happy about that.

As the kicker, the list’s comments also contained instances of my pet peeve: people asking me why there are only 8 items on the list. In a site called the 8List. This almost directly gave birth to one of my lists that was so controversial that it was taken down from the 8List: 8 Mind-Blowingly Stupid Comments I See on List Sites.

Yes, I’m fond of the word “mind-blowing.” Why do you ask?

7) The 8List piece on atheism was pretty successful. What’s the most important thing you learned from publishing it?

I would have to say that I learned people tend to see an “agenda” when they see something on their favourite website that they don’t like. Write a single pro-LGBT list, a pro-RH list, and a list that explains what atheists are, and the 8List suddenly has a “liberal agenda.” That’s funny, because nobody’s stopping anyone from writing a list that is anti-LGBT, or anti-RH, or anti-atheist, so long as it’s not bigoted or sexist.