Our next freethinker is Ana P. Santos. Ana is a freelance journalist who focuses on women’s sexual health rights. She is the fabulous femme behind Sex and Sensibilities, and the Rappler column Dash of SAS. 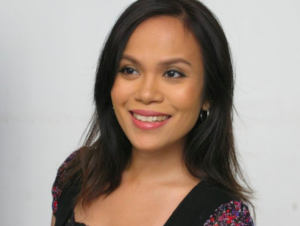 I think a freethinker is someone who chooses to live by their own rules and belief system rather than be constrained by a structure–religion or otherwise–manufactured by someone else. A freethinker is critical and questioning; a freethinker is unafraid of standing apart as an individual and standing up for what he/she believes in. I love the way that last phrase is said in Tagalog: may paninindigan. It has so much more feeling in it. There are just some words that like curse words, are better said in one’s mother tongue. : )

My own. And I would best describe that as a cocktail of different principles and beliefs that I picked up from various philosophies, life experiences, books, cultures, and interactions. It’s unconventional at best, I admit, but I reached a point where I’m unapologetic about my beliefs so it kind of evens things out.

3) What was the funniest or most interesting reaction you got from a person after you told him or her that you were a freethinker; and
4) In what way has being part of a freethinking community benefited you?

I believe in showing not telling. I’ve never really had to tell someone I was a freethinker. I think they figured it out after reading what I write or Tweet about. Being part of a freethinking community is so very liberating. There’s really no other way to say it. I remember in my high school English class, we were asked to prepare a persuasive speech. So while my other classmates wanted to talk about the post-cold war era, and the US bases (yes, I am totally dating myself), I wanted to talk about pre-marital sex. I thought then, as I do now, that sex is but natural in the context of a committed relationship between two consenting adults. When it was my turn to present the topic of my speech to my teacher, I told her point blank, “My topic is pre-marital sex. I’m not against it.” She was so shocked and asked me, “You’re kidding, right?”

The other girls in line snickered in a “told-you-so” kind of way…and I cowered. I softened my stance to no to pre-marital sex, but ended my speech with, “It’s only you who can make that decision.”

I got deductions for the last phrase because my teacher said I was fence-sitting when the paper called for a definitive stance. I always kind of look at that memory and feel a tinge of regret–especially in light of what I do know in terms of sexual health advocacy. I have no excuse except that I was 14 and probably the lone freethinker in a school that prized conformity more than critical thinking.

5) What are the most common questions you get with regards to sex?

The usual: How big do I have to be to please my girlfriend/wife? from the boys and from the girls, it’s how not to get pregnant. I also get off-beat questions like: Is it true that the penis can get stuck in the vagina during intercourse, and a question posted on Twitter: Can I get pregnant from oral sex? That question spawned a witty retort from my friend, Alvin Dakis, another freethinker, who said, “Sabihin mo, hindi sya mabubuntis pero mabubusog sya!” In a column called “The Problem With Virginity”, the girl was asking about oral sex; she was avoiding penetrative sex because she wanted to preserve her virginity and wanted me to assure her that she would not get pregnant via oral sex or if he boyfriend just slid his penis outside her vagina but never put it inside. I told her neither I, nor science, could give her that assurance.

As you can see from the questions, we have a long way to go in terms of understanding not just sex — but biology, even.

6) What have been the greatest obstacles to freethinking in your life as a parent?

I can’t really think of any, honestly. Oh, maybe how my daughter would perceive it. Would she expect me to be normal like the other moms? Or would she think I was being too radical? All the hypotheticals. I’d like to think that I’ve managed to negate some of that by showing her that I respect her views and she should thus, respect mine. During one dinner conversation, we were discussing the RH Bill and I found her echoing some of my points. I asked her if that was really what she thought and assured her that it was okay for her to have an opinion different from mine. What is important is she has her own opinion!

7) Why do you think it’s important to be sex positive?

I have my own definition of being sex positive: it’s acknowledging each person’s divine right to give love, show love, and make love. It is a mistake to separate our sexuality from our humanity. Sex positive is just the opposite of how we’ re treating and talking about sex now–as dirty, as taboo and restricted to married people. A lot of our problems in population and development and even gender stem from the sex negativity. Isn’t the very definition of insanity doing the same thing over and over again and expecting a different outcome? So if things are not working under the current status quo, then we should try something different like sex positivism.