Our next freethinker is Nancy Siy. Nancy is a full-time (and currently the only) Jivamukti Yoga teacher in Manila. The job is part-DJ, part-masseuse, part-preacher, part-stand-up comedian, part PE teacher, and part-therapist, which makes it all the more interesting. To take these classes that are dubbed “the wild child of yoga”, visit www.manilajiva.com for schedules and details. 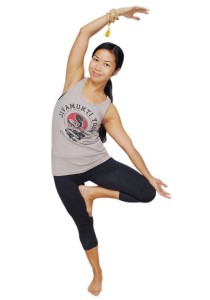 When I said I do not prescribe to any religion, I was asked “Where do you get your morals?” And I said “How can you question my morals? I’m vegan. My morals tell me it is wrong to kill.”

I did not grow up with a religion to begin with, so it was never a big deal to me. I didn’t have to “come out”. My freethinking friends and I discuss issues that are not very popular, like the morality of the choices we make – what we eat, being childless by choice, adoption (human or animal), etc.

5) What made you decide to be a vegan?

When it hit me that I was part of the problem, that my actions are causing so much fear and suffering which are completely unnecessary, I felt that I can no longer participate in this system of oppression, and that made me vegan.

6) What do you think is the connection between veganism and freethinking?

In a society where consuming animals is normal, one has to be a freethinker to veer away from tradition and norms and grasp the concept of speciesism. Just as religion is imposed on young children, so is the idea that animals are inferior. Just as non-conformity to a religious society can put pressure on an atheist, so can veganism alienate one from “normal people”.

7) Why do you think people who are otherwise rational and compassionate still not vegan?

Veganism is not just about what one chooses to eat or wear or support. Veganism is a paradigm shift not only of how we view animals but also of how we view ourselves (our power, our choices, our priorities). There are people who may understand the ethical arguments completely, who feel awful when they watch animals being slaughtered, but they do not make the behavioral change because they have not yet made the connection of just how powerful they are. The ego swings the inferior-superior pendulum. “It’s only me, one person, I can’t make a difference anyway” fall into the inferior while “I cannot be inconvenienced to think about others” fall into the superior side of this ego swing. To become vegan, one has to get over oneself, one’s ego, and see that this is “not about me”. It’s not just about logic. It’s about caring. It’s about compassion. It’s about being able to empathize.

8) What is Jivamukti Yoga?

Jivamukti Yoga is a yoga practice that teaches unity, oneness, and the connection with all beings. In a Jivamukti Yoga class, it is emphasized that although we use our bodies to come into contortionist-like positions, we do it because we use our body as a prop to get to know ourselves better. We can observe our reactions, our tendencies, our thoughts, our patterns. We become the silent witness. Our movements become a meditation in which we see ourselves. Jivamukti Yoga teaches nonviolence/compassion as the most important practice of yoga. Other elements included are devotion/transcending the ego, meditation/observation, sound/music/vibrations, and the intellectual study of yogic texts. There is a focus of the month every month, and the breadth of topic is broad, from Tat Twam Asi (You are That/God) to Sacred Geometr,y to sex, to aparigraha (non-greediness), to overcoming negative emotions, etc. Jivamukti Yoga, more than any other yoga style I have tried, is a communication platform to raise consciousness. Jivamukti Yoga teachers boldly talk about issues like veganism, environmentalism, and social activism. We draw inspiration from enlightened people (like the Buddha) and peace makers (like Martin Luther King) alike. I would sometimes read excerpts from literary works, sometimes play audio clips by Alan Watts or Neil deGrasse Tyson, or play songs by the Beatles or Bob Marley, or songs written about  heroes of peace like Gandhi.

9) How have you pointed your skeptic rational mind at the concept of chakras, and how do you reconcile this skepticism with the spirituality involved in yoga?

Yoga does not contradict science. The terminologies are different, but the concepts are the same. Yoga uses words like “prana” which is basically energy or “chakra” or energy centers. For example, the “manipura chakra” or power center is energetically located in the solar plexus, which deals with the pancreas and liver. The concept of this power center can be “translated” in layman’s terms as the center that deals with what we consume (what we eat) – the digestive system. These seemingly esoteric concepts are very practical if you dig deep into it.

Yoga is actually very practical, because it is a system that asks us to dig deep into the root causes – causes of our suffering, patterns, beliefs etc. I am spiritual not because I am not skeptical. I am spiritual precisely because I am skeptical of what is unreal. It is unreal to think that human beings are the center of the universe. It is unreal to think that reality only exists within our very limited perceptions of time, space, and dimension. The way I see it, scientists explain while yogis experience. Movies like “What the Bleep Do We Know” explore very yogic concepts. When Neil deGrasse Tyson said that our atoms are made up of the particles of stars – carbon, nitrogen, oxygen – that is what yogic teachings refer to when they say we are all connected and that “the universe is in us”.

DISCLAIMER: The opinions in this post are of a personal nature, and do not speak for the Filipino Freethinkers as an organization.